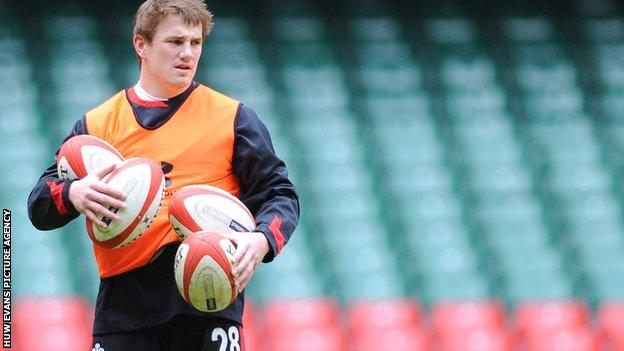 Jonathan Davies admits he has been working to improve his passing after Wales' Six Nations defeat to Ireland.

The Wales centre, who was part of the 2012 Grand Slam side, threw two passes into touch during the 30-22 defeat in the Six Nations opener in Cardiff.

Mark Jones, the Wales and Scarlets skills coach, has admitted Davies is not a "natural passer".

"People criticise my passing and I have worked hard and I will keep working on it," said 24-year-old Davies.

Davies and his centre partner, Jamie Roberts, have found themselves criticised for the lack of creativity in the Welsh midfield as the defending champions lost at home.

Rob Howley, the interim Wales coach, has given the pair, who played together in Wales' 2011 World Cup semi-final appearance, the vote of confidence for the trip to face France in Paris on Saturday evening.

But Scarlets centre Davies reveals criticism of his passing has been prevalent throughout his career.

"It's probably the part of my game which is not my strongest and I am doing everything I can to make sure its at a standard which is international standard," he said.

"I am working on it but its amplified with how those two passes went to touch on Saturday."

Davies admits he has pored over the "video nasty" of his personal display and was disappointed with his performance.

The 32-times capped Welsh international has focussed on his distribution skills in training this week but he is determined not to let the criticism consume him.

"I am the first one to criticise myself but I am just getting on with my job now," said Davies.

"I have done a lot with it the last couple of years and I just have to make sure when it comes to pressure situations it is as accurate as it can be.

"I have gone away this week, looked at my performance and have worked hard with the coaches.

"You understand where you went wrong... and when you look back at the first half... I was hugely disappointed with the start I had.

"I thought my second half, I played a bit more, but I have put that behind me now and am looking forward to the game on Saturday."