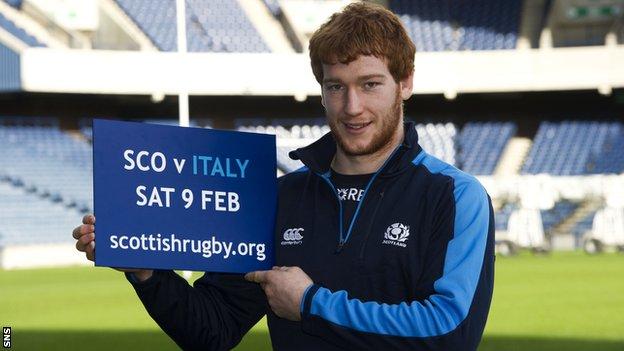 Former captain Mike Blair believes the introduction of Rob Harley will help Scotland as they bid for Six Nations victory over Italy.

"Even in training he was a guy you hated playing against - he would always make a real fight of the breakdown and you would never get clean ball.

"I can see him bringing that spirit with him and that being a big plus for Scotland."

Glasgow's Harley takes over from the injured Alasdair Strokosch at blind-side flanker for Saturday's Murrayfield clash.

And it will be a first international start for the 22-year-old, who scored a try on his debut during last year's summer win in Samoa.

Italy travel to Edinburgh buoyed by last weekend's 23-18 victory over France, while Scotland opened the tournament with a 20-point loss against England.

"Normally, Scotland at home in this fixture would start as firm favourites but the tables have been turned a bit with Italy ranked nine in the world and Scotland at 12."

Scotland have not won at Murrayfield since a World Cup warm-up game against the Italians in 2011 and are aiming to avoid starting a Six Nations campaign with two defeats for the sixth consecutive year.

"It's a massive game," added Blair, who was capped 85 times.

"Pressure is a funny thing. It can work two ways; it can build a spirit in the camp and unite everyone or it can pull a team apart.

"Knowing this bunch of players, I think it's going to bring them together."

Scotland scored two tries in their 38-18 loss at Twickenham, with Sean Maitland and Stuart Hogg crossing the line, either side of four scores for the hosts.

"There were enough exciting things against England for Scotland to go into this game with a bit of confidence," explained Blair.

"Playing England at Twickenham is an incredibly hard match to open the championship with, having not won there in 30 years.

"It was a big test but there were positives to take - especially the back three [Hogg, Maitland and Tim Visser]."