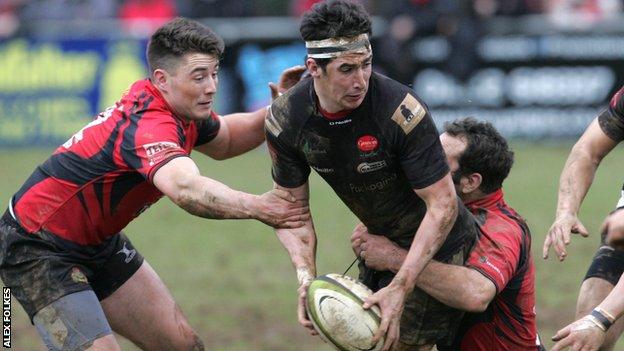 Redruth have beaten Cornish rivals Launceston for the first time at Polson Bridge in a league game.

Redruth forced a penalty try after 28 minutes as Neil Bayliss and Ben Hilton were sin-binned to go 10-0 ahead after Paul Thirlby's early penalty.

"But I'd like to pay respect to Launceston. They showed massive spirit and came into the game with a good bit of form.

"We knew it was going to be tough to get that monkey off our backs and get the first win, but at the end of the day we worked hard for every play of the game.

"Launceston defended for their lives in the first half and maybe edged it in the second, but I'll take the win any day, especially up here."

The victory keeps Redruth in third place in National Two South, nine points off leaders Worthing and one off second-placed Henley, with games in hand on both sides, while Launceston drop to seventh.

"I thought it was a well-deserved win for Redruth," said Launceston captain Tom Rawlings.

"They came up here in good form and a good league position, but I think it was a good performance from my Launceston boys as well.

"When we went down there at the start of the season we didn't have a good day at the office and they made us look a bit silly.

"Today we put in a worthy performance. We're gutted that we didn't win the game but our guys put it in for the full 80 minutes.

"We defended well with 13 men and if we didn't have that dodgy 20-minute spell in the first half it might have been a different result."