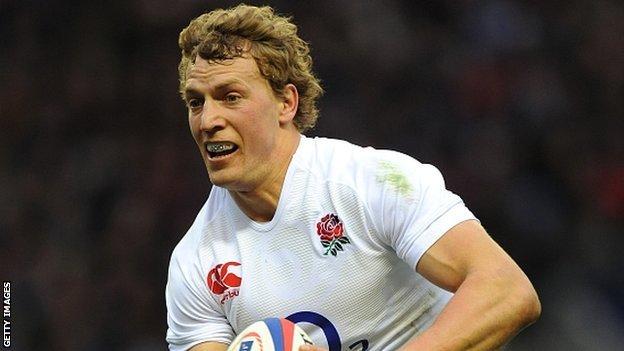 With the centres playing well and Manu still returning to match fitness, he will give us great options off the bench

Billy Twelvetrees has kept his place in England's starting XV for Sunday's match against Ireland in Dublin, while James Haskell makes his first start in the Six Nations since 2011.

And head coach Stuart Lancaster has decided to retain the midfield pairing of Twelvetrees and Brad Barritt.

Tuilagi is on the bench, while Haskell replaces the injured Ben Morgan.

Wasps flanker Haskell will start at blind-side, with Tom Wood shifting to number eight, where he finished the game against the Scots.

"I've played internationally in all three back-row positions and I'm playing at seven for Wasps at the moment," Haskell told BBC Sport.

"Wherever England need me I'm confident I can do a job, I'm just happy to be involved."

Haskell, 27, opted out of last year's Championship in order to play club rugby in Japan and then New Zealand, but has worked his way back into Lancaster's plans.

Morgan was one of England's most influential players against Scotland but he limped off after 45 minutes with a sprained ankle.

Tuilagi takes over from Saracens wing David Strettle while Leicester's Thomas Waldrom is on the replacements' bench in place of Haskell.

"We were pleased with our intent to play against Scotland," said Lancaster.

"A lot of the players performed very well and with Manu coming back into the equation it gave us some selection decisions.

"But with the centres playing well last week and Manu still returning to match fitness, he and others will give us great options from the bench in what I am sure will be a physical encounter."

England have not won a Six Nations game in Ireland for 10 years. Their last tournament victory in Dublin secured a Grand Slam 2003, the year England also won the World Cup.

England did win a World Cup warm-up match in Dublin in 2011 and claimed an emphatic 30-9 victory in their last Six Nations meeting at Twickenham last March.