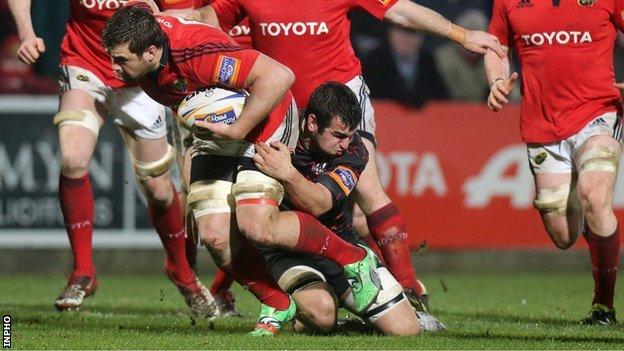 Munster beat Edinburgh for the fourth time this season after a dominant second-half display in the Pro12 match at Musgrave Park.

Ivan Dineen's kick ahead allowed Stander to get in for the first try in the 68th minute.

Munster crossed again with replacement hooker Sherry scrambling past Talei after an assist from Stander.

Edinburgh had taken an early lead through a Piers Francis penalty and the Scottish team were only 6-3 behind at half-time, but Keatley's right boot pushed the hosts out of sight in the Cork rain after the interval.

Munster had to endure a difficult first quarter during which BJ Botha was penalised for not scrummaging straight - referee Ian Davies sin-binned the South African prop in the 13th minute.

Francis, who missed a difficult first penalty, made no mistake with his second attempt as Edinburgh edged into the lead.

Munster, who did the double over Edinburgh in the pool stages of the Heineken Cup, maintained their presence in the visitors' 22 and another Keatley penalty gave them a six-point buffer after Willem Nel infringed in a scrum.

Keatley did the honours again after Munster's stand-in captain Jamie Coughlan was caught by a high tackle from Richie Rees.

The province's direct style forced further mistakes from territory-starved Edinburgh and a fifth successful strike from Keatley had his side 15-3 ahead by the hour mark.

A sixth followed from the fly-half before a pinpoint Hanrahan pass sent Dineen scurrying up the right touchline. He kicked ahead for the supporting Stander, who went over unopposed for a 68th-minute converted try.

Sherry then added the second try for the province.