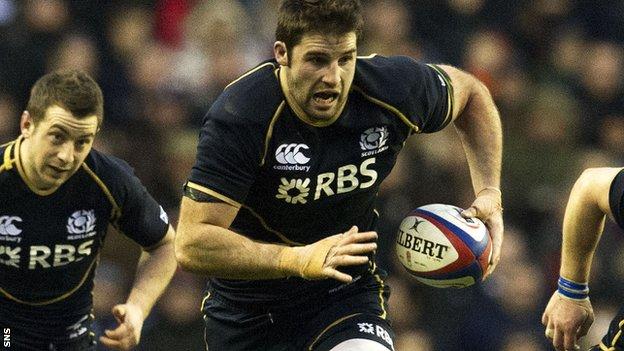 Italy may have only won once away from home in the Six Nations but they start as favourites at Murrayfield, according to Scotland flanker Johnnie Beattie.

"We've seen the level of performance that Italy have put together over the last few years," said Beattie.

"We've come off the back of a disappointing performance against England and Italy beat France.

"In my eyes, France were pre-tournament favourites, so we are definitely the underdogs for this game."

Italy's sole success on their Six Nations travels came at Murrayfield in 2007 but the visitors arrive in Edinburgh in good spirits after a fantastic 23-18 win over France.

Scotland opened with a 20-point defeat at Twickenham.

And Beattie knows major improvements are needed if the Scots are to halt a home losing sequence that stands at six matches.

"We weren't good enough against England," he added.

"This time we are at home and we are looking forward to trying to change things.

"We have analysed the Twickenham game and in many, many respects we were nowhere near where we wanted to be.

"We've seen all of the faults and the only people that can change that are us - the players.

"Everything is on us and I'm looking forward to playing again and doing better."

Beattie plays his club rugby in France with Montpellier and is familiar with Italy's star man Sergio Parisse.

"He's been the talisman for almost a decade," Beattie said of his opposite number. "He's a great player and a great bloke as well.

"I played against him at Stade Francais this season and he performed very well.

"He's the captain; he runs a lot of things for Italy and it's up to us to stop that and nullify his threat."

Interim forwards coach Dean Ryan was frustrated by last Saturday's 38-18 loss against England and is seeking a positive reaction from the home side in Edinburgh.

"We put pressure on ourselves to get things right," he explained.

"Italy are a dangerous side. They proved that last week against France and that adds some spark to the occasion.

"We're just concentrating on ourselves and we know we have to play really well to have a chance of being successful.

"That is a fundamental of the game and we are trying to get this squad to understand that is the first place you go to, it's the first thing you get right.

"I'll be pretty disappointed if we don't see a response."