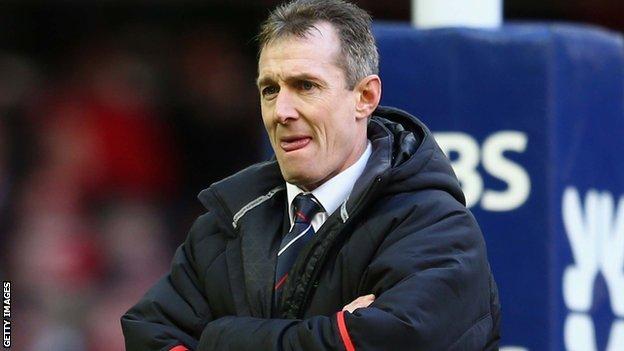 Rob Howley paid tribute to his side's composure and self-belief after they finally ended their eight-match losing streak against France in Paris.

Wales recorded a 16-6 win against Les Bleus in the Six Nations, their first victory at Stade de France since 2005.

Howley, the interim Wales coach, won just twice with Wales in Paris as a player and appreciated his side's achievement on Saturday evening.

"To win out in France is no mean feat," said Howley.

"The quality and the character of our rugby was evident and the players had to give everything for 80 minutes.

"From my personal experiences as players in 1999 and 2001, you don't often come out here and win.

"When we came out for the second half we showed a lot of composure when we didn't have the ball. I thought our defence was outstanding."

The reigning Grand Slam champions bounced back from their 30-22 defeat to Ireland at the Millennium Stadium in Cardiff in the Six Nations opener.

Wales, who had conceded 20 points in the first half against Ireland, went in 6-6 at half-time and had dominated much of the opening half against the French.

Wing George North's second-half try and the reliable boot of full-back Leigh Halfpenny proved to be the difference between the two sides as Wales consigned France to a second successive defeat in this Six Nations campaign, after their loss in Italy the previous week.

Howley, who is in charge of Wales while Warren Gatland is on British and Irish Lions duty, paid tribute to a Wales side which won the Grand Slam in 2012 and reached the semi-finals of the World Cup in New Zealand in 2011.

"The self-belief and confidence we have tried to keep going was very evident and that is what you need to win in France."

Howley admitted that Wales had been stung by the recent criticism which followed the defeat to Ireland in their Six Nations opener.

"When you lose the first game of the Six Nations campaign at home, of course it brings pressure," said Howley.

"But the nature of that game [Ireland], in the first and second half, meant we were very positive coming out of that game."

Howley also believes the manner of Wales' victory against the French could be a significant step for a side which has been on the end of some narrow defeats in recent times.

On the recent summer tour of Australia, Wales suffered close defeats and lost games they should have won and slumped to a 3-0 Test series defeat down under.

Wales also threw away victory against Australia in December, when the Wallabies scored a try with the last move of the match to snatch a 14-12 victory at the Millennium Stadium.

"That is what we have learnt when we look back to Australia and losing those three Tests, we were composed [against France].

"When we went in front, we were composed.

"We didn't press any panic buttons because the players had been there and had that experience of losing and being under the pump."