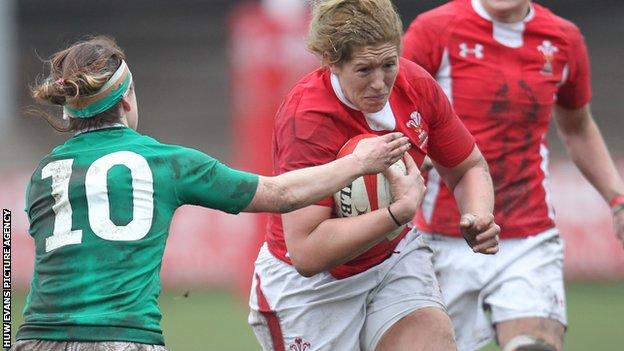 It's always a tough place to play out in France and the home side were looking to get back to winning ways after their shock defeat in Italy on the opening weekend of the Six Nations.

I mentioned in my last column how difficult it is playing out in France as everything tends to go against you. Speaking to some of the Welsh girls, that is exactly what they said.

Three Wales players were yellow carded, penalty after penalty awarded against them and blatant things happening in front of French touch judges not being picked up.

But even in saying that, France were the better side on the day.

Wales were unlucky that they picked up a few injuries during the week so there were a few changes to the side which had lost narrowly to Ireland.

They will take some positives out of the game. After about 20 minutes France had scored a couple of tries and I really did think the floodgates would open.

But in fairness to Wales they only conceded two tries in the second half and they really stuck at it and showed some fight.

A couple of new players were capped, including Dyddgu Hywel at full-back while the captain Rachel Taylor, who didn't start because of injury, came on at half-time.

They have to move on now and focus on the Italy game in two weeks' time because that game is crucial as they really need to get a win under their belts. The Italians secured their second win of the tournament with victory over Scotland on Sunday.

Wales will be in camp next weekend and will be training all day Saturday and Sunday and will come together again on the Wednesday for the trip to Italy.

Ireland now have a great chance of winning the Grand Slam this year following their comprehensive victory over England.

The Irish girls have made the Ashbourne ground a fortress and have hardly lost a game since they've been playing there.

It was now or never for Ireland against an England side who were without 17 players who are playing on the IRB Sevens circuit.

I watched the game online and Ireland were in complete control. To win 25-0 and not let England score a point was excellent.

Ireland's win is good for the women's game because England have been so dominant in the Six Nations for so many years. The last team to beat them were Wales and I was part of the side that won by a point at Taff's Well in 2009 and went on to win the Triple Crown that year.

The only positive for England I suppose is that they won the Houston Sevens last weekend and have moved up to number one in the women's IRB rankings.

You can leave questions or comments for Non on this page.