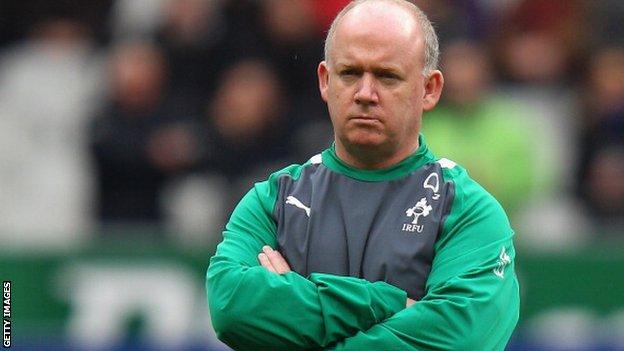 "This Championship is a long way from being over. France are in London next time up and England still have to go to Wales," said Kidney.

"We just have to go about our business in the three matches we have left and see where we end up.

"When we get our own game right we will be in a good position. We just were not on the money today."

Ireland beat Wales 30-22 in their opening fixtures and are currently fourth in the table with two points.

And Kidney added: "The Grand Slam is a wonderful thing to win, but first and foremost you play for the championship and we're still well in for that.

"Sunday's result gives England a bit of daylight with the other five sides on two points each with three matches to play.

"What we have now are three more opportunities to get three wins. Let's get to eight points and see where we are at the end of it."

Kidney admitted the loss of winger Simon Zebo and fly-half Jonathan Sexton to first-half injuries had not helped his side's cause, but did not use them as an excuse for the disappointing performance.

"These knocks and bangs, when they come early on, can effect the way you go about things," added the Irish coach.

"But we always talk about it being a 23-man game and lads came in and did a good job."

Ireland skipper Jamie Heaslip admitted there was dejection in the home dressing room.

"We are suffering a bit in there - it is a tough one to take," said Heaslip.

"At 6-6 they had a man in the sin bin and I really thought that we were going to create a bit of momentum but it did not go our way.

"There are a lot of lads in our dressing room feeling battered and bruised."