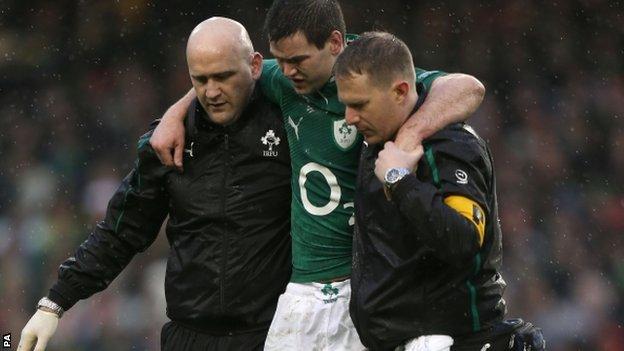 Ireland winger Simon Zebo will miss the rest of the Six Nations while outside-half Jonathan Sexton is a doubt for the Scotland match in two weeks' time.

Zebo broke a bone in his foot just 10 minutes into his team's 12-6 defeat by England in Dublin.

The 22-year-old Munsterman underwent surgery on Monday and has been ruled out for up to 10 weeks.

"It looks like a couple of weeks for Jonny, but it would be wrong to try to second-guess the outcome. We'll know more by Tuesday," said Kidney after his team's first defeat of the tournament.

"It's been an attritional couple of games and we had a few injuries leading into the tournament, but that's the way it goes."

Connacht second row McCarthy is rated doubtful however and will see a specialist this week for a further review.

O'Driscoll and Ryan will also see a specialist in the middle of this week for a further review.

Rob Kearney is recovering well after suffering a dead leg, while O'Brien's progress will be monitored throughout the week.

The absence of Zebo from the Irish backline will be a setback for Kidney as the winger lit up the opening weekend of the Six Nations with his backheel flick against Wales.

Sexton, injured in the 31st minute in Dublin, is another who impressed during the 30-22 win over Wales and is one of the leading contenders to start at fly-half for the Lions in the summer.