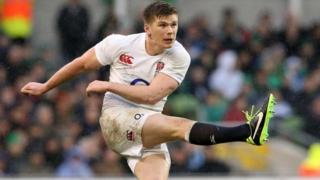 BBC Sport puts England's Owen Farrell under the Six Nations Spotlight, after the fly-half scored all of his team's points in a 12-6 win over Ireland in Dublin.

Farrell kicked four successful penalties, and was praised by the BBC's team pundits for his all-round display.

The result means England top the table, having won their opening two matches of the competition.