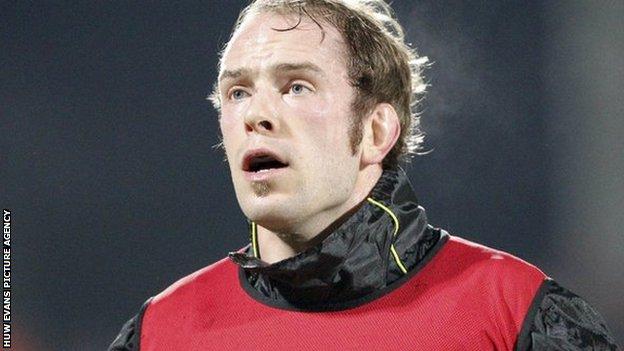 Ospreys lock Alun Wyn Jones has been added to Wales' Six Nations squad ahead of the match with Italy on 23 February.

Jones, 27, came off the bench in Ospreys' win over Ulster on Friday, the night before Wales beat France 16-6 in Paris.

He had not played since injuring a shoulder against Argentina in November.

Ex-Wales flanker Lyn Jones has said Jones should start against Italy, despite Andrew Coombs and Ian Evans impressing in the win against France.

"Should he be selected next time? Too right he should be," Lyn Jones told Sunday's Scrum V programme.

"He came on [as a replacement] on Friday night and changed the game for the Ospreys. [He was a] man amongst boys."

Lions lock Jones was one of three specialist second rows unavailable for Wales for the start of the Six Nations because of injury.

Blues' Bradley Davies and Perpignan's Luke Charteris are both out for the whole of the Six Nations tournament.

Wales were boosted by the return from injury of Jones' Ospreys team-mate Ian Evans, while Newport-Gwent Dragons' Andrew Coombs was awarded his first cap against Ireland.

Evans and Coombs started in Wales' 16-6 win over France in Paris, the day after Alun Wyn Jones made his Ospreys return.

The Wales captain missed the game in Paris with a shoulder injury and the side was skippered by Ryan Jones in his absence, with Justin Tipuric starting in Warburton's usual number seven shirt.

Rob Howley's side ended their eight-match losing run with victory over France and their first win in Paris since 2005.

"Sam Warburton should come back into the side and he should start," added the former Ospreys head coach on Scrum V.

"He's the captain and is the best open-side in Wales for two years and I think we should start him."

Kingsley Jones, Lyn Jones' assistant coach at London Welsh, believes Wales should stick with the team that won in France.

"I would keep Alun Wyn Jones on the bench and I would keep the same team," the Russia head coach said.

"They've been through eight defeats, they've worked hard and they got a win in France.

"I'd keep Tipuric in the team, he's done nothing wrong and has played well."

But former Wales lock Gareth Llewellyn believes Andrew Coombs and Ian Evans should retain their places in the second row against Italy.

"He's [Coombs] got the shirt, he's played really well, he's done nothing wrong and why would you change it?" Llewellyn said.

"I think Ian Evans has played superbly well off of very little rugby and Alun Wyn can come on the bench.

"He'll get some game time and have a chance to put his hand up for the England game."