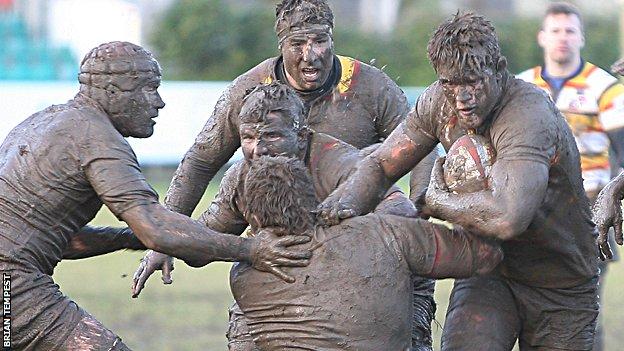 Cornish Pirates boss Ian Davies was unhappy with some of the play from his forwards as his side beat bottom-placed Doncaster 31-18 to move into the play-off places in the Championship.

"Certain aspects were disappointing from the forwards, and they've been told in no uncertain terms," he said.

"We've got away with it a little bit," he added to BBC Radio Cornwall.

Darren Semmens crossed for his first ever Pirates try after three minutes before Rhys Buckley's score made it 7-5.

Conceding three tries from driven mauls was like a knife through the heart, so they're going to feel my wrath this week for that

A further Hallett penalty and one from Doug Flockhart saw the scores remain level at 13-13 at half time before Pirates ran away with it in the second period.

Semmens got his second five minutes after the restart before Hallett kicked another penalty and Laurie McGlone and Matt Evans went over.

Sam Pailor scored a late consolation for the visitors, who remain five points adrift at the bottom of the table.

"We've got much better teams than Doncaster coming to the Mennaye and we've got to go away to Leeds who are riding high as well so we need to up our attitude," Davies said.

"Conceding three tries from driven mauls was like a knife through the heart, so they're going to feel my wrath this week for that."