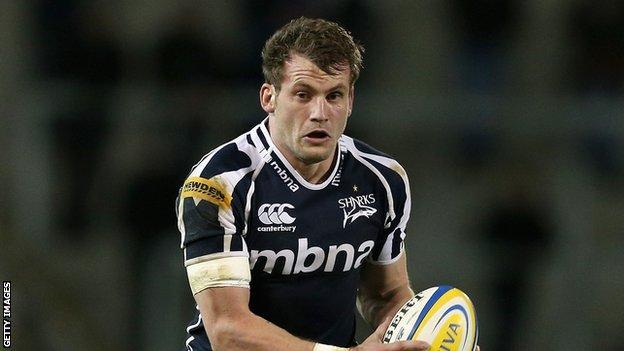 Mark Cueto says helping Sale to only their third league win this season was more important that becoming the Premiership's record try scorer.

Cueto got his 76th try in Sale's 21-16 win over Exeter to achieve the record.

"I don't want to be cliched but the win is the biggest thing," the 33-year-old told BBC Radio Manchester.

"But it's nice and it's one of those things that I'll probably look back on a year or two when I've finished and it'll be a great achievement."

Statistics correct as of 11 February 2013

The former England international surpassed Steve Hanley's tally of 75 tries to achieve the title, but he doubts he will be record-holder for long, with London Wasps winger Tom Varndell currently only five tries behind him.

"I think Tom Varndell will probably break it before I retire but it's brilliant," he admitted.

However, a poor start to the season means that Sale still sit bottom of the Premiership table, five points off nearest rivals London Irish, but winger Cueto feels the club can build on the momentum from their recent run of form.

"The confidence and belief was there from the past two weeks," he said. "Although it was in the LV it was still massive for the club to get those results and it's three wins on the bounce.

"If we can forget about what happened in the first part of this season and we've got to take the confidence and belief from those three games.

"We're still not out of trouble and we'll go down to Welsh next weeks needing another win."