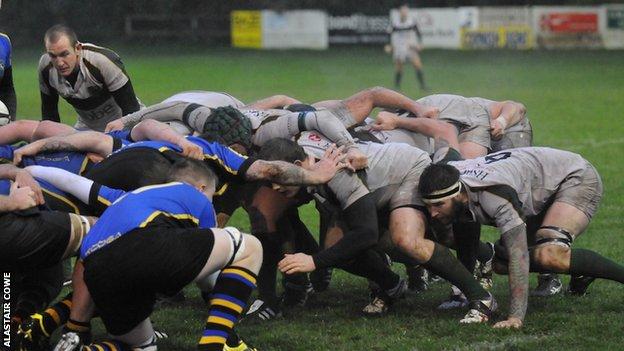 Guernsey boss Jordan Reynolds says a lapse at the start of the second half cost his side as they went down 38-20 at Bishop's Stortford.

They conceded three tries inside the first 10 minutes of the second half as they lost a fifth game in six.

"At half time we were in with a shout," Reynolds told BBC Guernsey.

"But there was a lapse at the start of the second half and they managed to score three tries and that was the difference in the game."

Marcus Cattell touched down in the 28th minute to put the home side 12-5 up before former Bristol man Pool got a second unconverted try to bring Guernsey back into it.

But right on the stroke of half-time Sam Winter scored to put Bishop's Stortford 19-10 ahead at the break, before two tries from Henry Child and one from Adam Gelman at the start of the second period effectively won the game for the hosts.

Simon Sharrott and Jim Regnard got late consolation tries for Guernsey, which provided them with the bonus point they needed to move 10 points clear of the relegation zone.

"We got a losing bonus point which is good," Reynolds said.

"There were some great improvements over the last couple of weeks and a lot to be taken out of the game in a positive way."