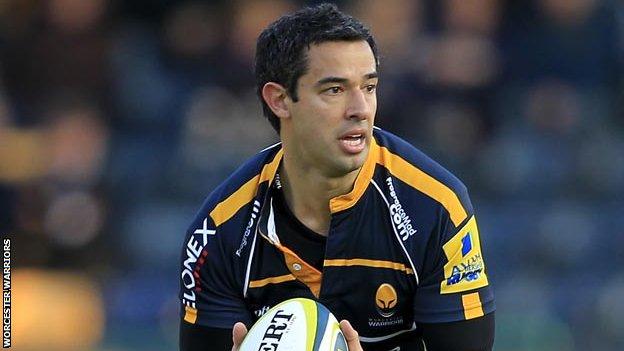 Worcester coach Richard Hill has refused to blame a sickness bug in the Warriors' camp for Saturday's latest Premiership away defeat at Bath.

Worcester have now lost all seven away league games this season.

But Hill made light of the late loss of stand-off Andy Goode, who was sidelined with diarrhoea and vomiting, forcing Hill to call up Danny Gray.

"Danny stepped into Andy Goode's shoes and did remarkably well considering. We can't use it as an excuse," said Hill.

"He kicked his three penalties and played really well, even though he was ill himself," he told BBC Hereford & Worcester.

Bath is the worst place to come and lose. I've had pretty bad returns every time I've been back here

After trailing only 13-9 at the break at The Rec, Worcester spent the early part of the second half camped in the Bath 22, only to then concede a match-turning penalty. And, from there, Bath went on to win convincingly, running in three of their five tries in the space of 23 second-half minutes.

Former Bath and England scrum-half Hill, who still lives in the city, admits that Saturday's defeat had hurt more than most.

"It's the worst place to come and lose," he said. "I've had pretty bad returns every time I've been back here.

"But you can see that Bath have been gathering confidence from their results in the LV=Cup and in the Amlin Challenge Cup and we caught them at the worst time."

The Warriors put on one of their best away league displays of the season at Franklin's Gardens back in October when they came from 37-3 down to run in four tries from Jonny Arr, Josh Matavesi, Josh Drauniniu and Ollie Hayes inside 16 minutes to earn two bonus points.