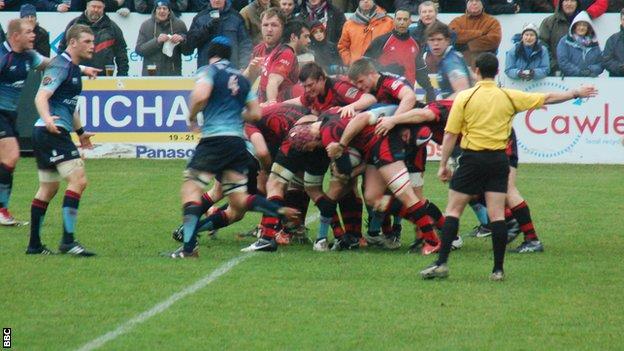 Jersey lost 38-21 at second-place Bedford Blues on Saturday and remain 11th in the RFU Championship.

"We're undoing positive work straight away," Boden told BBC Radio Jersey. "You can't come to tough places like Bedford and do that.

We need the crowd to turn up and make loads of noise for the boys. We'll keep a belief in the camp - there's plenty to stay positive about

"Winning a penalty then missing touch, turning the ball over then giving it straight back - game changing moments."

He continued: "It's hard to apply pressure for long periods of time when you're making these types of errors.

"[Bedford] is a tough place to come, not many teams win here, but let's not hide behind that - we came here to get 4 points and didn't."

Saturday's defeat means Jersey are yet to win away from Saint Peter this season, and are just five points clear of rock-bottom Doncaster.

At home they have won four of their last five Championship matches and Boden has urged supporters to get behind the team for this weekend's home clash with third-placed Nottingham.

"It's a massive game and we need the crowd to turn up and make loads of noise for the boys," he added. "We'll just keep working hard and keep a belief in the camp - there's plenty to stay positive about."