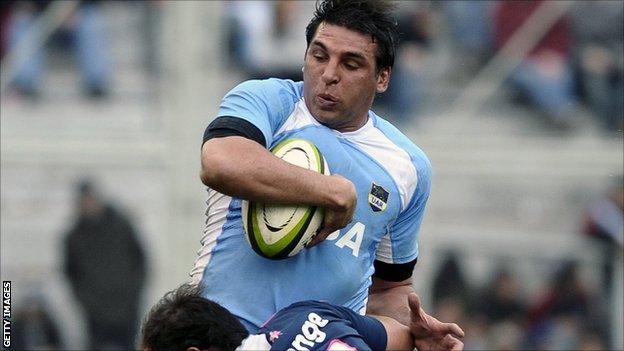 Cabello, 34, has been capped 19 times at international level and last year was ever present for Argentina in their inaugural Rugby Championship campaign.

He is as comfortable in the second row as he is in the back row and Welsh head coach Lyn Jones believe he will be a real asset to the Premiership side.

"Julio is a quality player with a high work-rate," said Jones.

Jones added: "He will add a great deal of ability to our squad for the final push in the Premiership.

"We've got eight games to go and we need as much depth to our squad as possible to be as competitive as we can in mid-February as we need to be in May."

Cabello, who made his debut for Argentina in 2010 against France in Montpellier, was also part of the side that came close to upsetting Australia - scoring a try in Argentina's 23-19 Championship defeat last year.

He was also was subsequently in the Pumas team that beat Wales at the Millennium Stadium in November.

Selected for Argentina's 2011 World Cup squad, he started the pool win over Scotland and scored the Pumas' only try in their 33-10 quarter-final defeat to eventual champions New Zealand in Auckland.