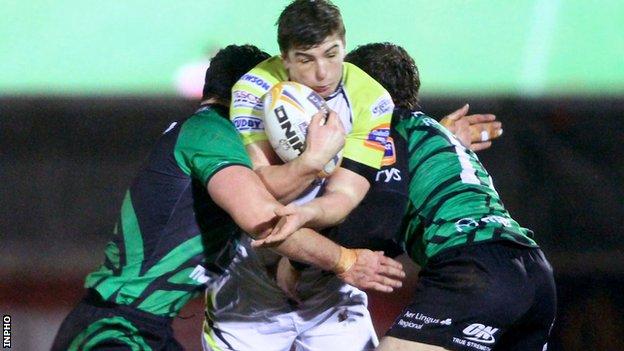 Connacht defeated the in-form Ospreys to register a first win over the reigning Pro12 champions since 2008.

The teams traded tries in the first quarter, Kahn Fotuali'i striking for the Ospreys before Willie Faloon replied with his first Connacht try.

Parks kicked two penalties to leave Connacht 13-7 ahead at half-time.

Although the visitors had the better of possession early on, Connacht snuck into a seventh-minute lead as Parks punished a scrum infringement by Cai Griffiths.

Playing into the wind, a good spell of ball retention duly paid off for the Ospreys on the quarter-hour mark.

Morgan was held up short before his half-back partner Fotuali'i quickly tapped a penalty and burrowed over from close range.

Morgan converted but the Ospreys' lead lasted barely four minutes as the hosts hit back in determined fashion.

Connacht attacked from a solid scrum with John Muldoon and Michael Swift linking on the right wing.

The ball was recycled and flanker Faloon's clever line took him over past two defenders.

Parks landed the difficult conversion for a 10-7 lead and was narrowly wide with a subsequent penalty from long distance, with the Ospreys front row coming under further scrum pressure.

Connacht had the final scoring opportunity before the break and Parks stepped up to widen the gap to six points, rewarding his forwards for another power-packed scrum.

The wind advantage was with the Ospreys for the second period, but a Kyle Tonetti block and a subsequent three-pointer from Parks kept Connacht on course.

Alun Wyn Jones's first start for the Welsh region since October was not going to plan, and Danie Poolman went close to collecting a loose ball during a dangerous counter-attack.

Minus a raft of Wales internationals, the title holders brought on Rhys Webb and Jonathan Thomas and a gradual improvement led to Morgan's lone penalty goal.

A pinpoint kick from Parks allowed Robbie Henshaw to hammer Richard Fussell in the tackle and the Ospreys full-back conceded a penalty for holding on.

Parks clipped the place-kick over from the left for a 19-10 scoreline before Ospreys sealed the win with the out-half's sweetly-struck drop goal, two minutes from time.

Those kicks took the losing bonus point away from the Ospreys and James King's yellow card for a dangerous tackle on Faloon saw them end the match with 14 men.