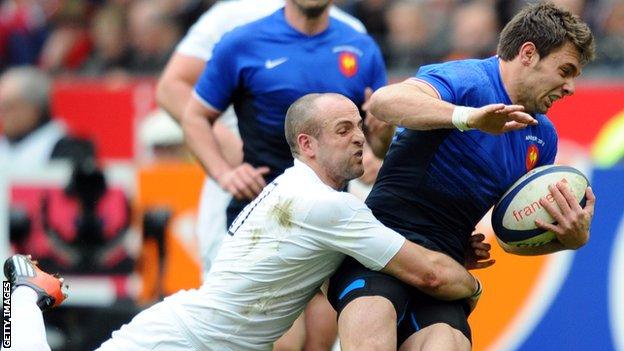 Toulouse wing Vincent Clerc has been recalled by winless France for their Six Nations game against unbeaten England at Twickenham on 23 February.

France have lost to Italy and Wales in their opening two matches.

"It is necessary to freshen up the squad mentally and physically," said coach Philippe Saint-Andre.

Clerc, who has won 63 caps for Les Bleus, missed the defeats by Italy and Wales with a thigh problem but is expected to be restored to the right wing after Maxime Mermoz was dropped. Wesley Fofana is set to be moved to inside centre after being played out of position against the Italians and Welsh.

"We want to get the team spirit back that we had in November," added Saint-Andre. "We won't give in, we will go to London with the will to do better.

"We want to make things up to our fans and to win this match. I'm sure we can do it."

England have made a 100% start to their Six Nations campaign, following impressive victories over Scotland and Ireland.