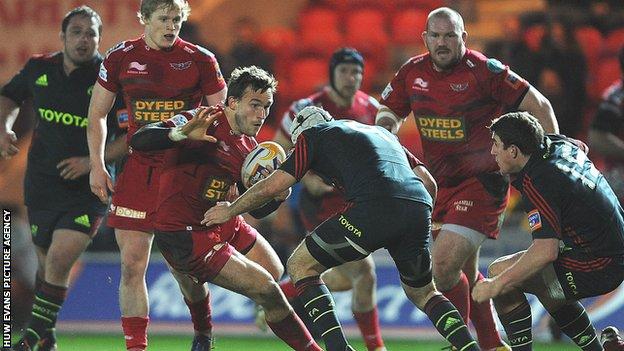 Williams, 20, landed five penalties and a drop-goal in only his second league start for the Welsh region.

In contrast, O'Gara landed just two out of five attempts at goal and his Munster team-mates were equally unimpressive with ball in hand.

He did have the final say, though, by converting Denis Hurley's late try.

That was the final act of encounter that rarely caught fire, and hardly the preparation O'Gara would have wanted before facing Scotland in next Sunday's Six Nations match against Scotland at Murrayfield.

Williams, though, showed maturity beyond his years as he boosted Scarlets' hopes of finishing in the top four and making the end of season play-offs. It also gave them their first league double over the Irish province since 2004.

Scarlets edged a first half where handling skills and attacking momentum were at a premium.

They looked the more likely side with ball in hand, but only twice reached Munster's 22 as they were forced to attack from deep.

Their reward was three penalties from Williams, displaying better accuracy than his vastly more experienced opposite number.

O'Gara, who won his 127th cap for Ireland last Saturday in their Six Nations defeat to England, missed twice at goal inside the first six minutes but finally found his range after Williams' second success.

The pattern continued after the break, with Scarlets establishing a gradual stranglehold as Williams continued to punish Munster's indiscretions.

He missed his first attempt of the half, adding to one sliced effort before half-time, but soon made amends with two other well-struck kicks in quick succession to open a 15-3 lead.

Williams then showed O'Gara-esque instinct to take a drop-goal just past the hour mark when an attacking platform deep in Munster half began to run out of steam.

The match ended on a sour note for Williams, though, when he was shown a yellow card as the referee patience finally ran out with persistent Scarlet infringement as Munster launched desperate attacks in the dying stages.

And the visitors capitalised on the extra man with a rare piece of patient and precise attacking play that ended with wing Hurley crossing for the game's only try in added time.

It was left to O'Gara, with blood streaming down his face from a head wound, to bring proceedings to an end with a simple conversion but Muster left empty handed.