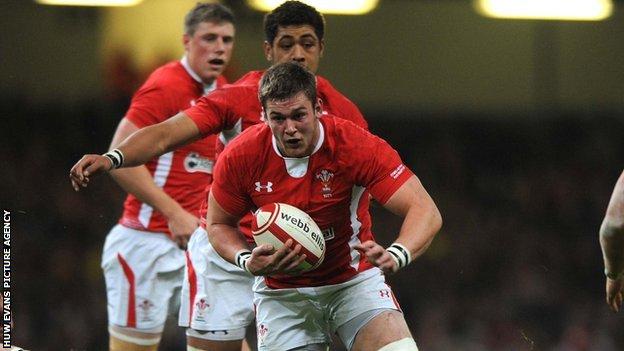 Dan Lydiate could return from injury for Wales' final Six Nations match with England in Cardiff on 16 March, according to interim coach Rob Howley.

Flanker Lydiate, 25, has been out since fracturing his ankle in September while playing for the Newport Gwent Dragons.

"At the moment, Dan is probably looking at England," said Howley.

"He is ahead of schedule and obviously the decision we have to make is [to select him] for one game or two games."

But Howley, who saw Wales end an eight-match losing streak with a Six Nations victory over France on Saturday, added: "On the back of the performance on the weekend, it's all about the players who are here rather than not here."

Lydiate, the player of the tournament in Wales' 2012 Grand Slam campaign, had been expected to play during the final weeks of the season, giving him an outside chance of making the British and Irish Lions tour to Australia in June.

But the 25-year-old, capped 27 times, has returned to light training with the Dragons sooner than expected and has been pencilled in for their Pro12 game at home to Leinster on 1 March.

Lydiate was part of Wales' impressive back row, along with open-side flanker Sam Warburton and number eight Toby Faletau, that helped Wales reach the 2011 World Cup semi-finals and win a Six Nations Grand Slam in 2012.

Lydiate and Wales and Lions lock, Alun Wyn Jones, are now two injured players that could return for Wales during this Six Nations campaign.

Jones, who played for Ospreys against Ulster on Friday, was added to Wales Six Nations squad on Tuesday.

"Obviously losing second rows like we have done, it is a great fillip to have another senior player back to fitness," said Howley. "It also gives us another option."

Ospreys lock Jones is one of three second rows, including Bradley Davies of the Cardiff Blues and Perpignan's Luke Charteris, who have been sidelined with injury.