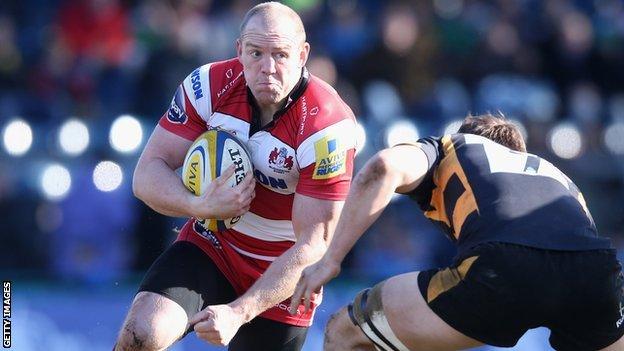 Wasps came from behind to beat Gloucester in a thriller at Adams Park.

But two tries in nine minutes from Christian Wade and Billy Vunipola turned it Wasps' way.

And, despite late tries from Ryan Mills and Charlie Sharples, Wasps' superior penalty count earned them a narrow win.

The visitors were the better side for much of the contest, but failed to capitalise on long spells of dominance at Adams Park, four missed penalties proving their undoing.

They also had only themselves to blame for the first of Wasps' two quickfire second-half tries midway through the second half when, with Wasps trailing by a single point, Vunipola seized possession to send Wade away for a 50-metre try.

If you give Christian Wade a bit of space there are very few better. People underestimate his strength and power and he has great footwork.

Former Wales stand-off Stephen Jones landed five kicks for Wasps, three penalties and two conversions, for a 13-point haul, supplemented by a penalty and conversion from his replacement Nicky Robinson.

Rob Cook did land one penalty and two conversions for Gloucester, whose final conversion was a Tindall drop goal in a failed attempt to speed up play to give them a chance of victory.

The Cherry and Whites' two tries in the final three minutes were enough to earn a second losing bonus-point - the first time they have crossed the opposition line four times in a Premiership game this season.

Gloucester earned reward for their early dominance when flanker Akapusi Qera, who went off with a neck injury at half-time, burst away from a maul on halfway to race 40 metres and send Robson in for the opening converted try on 13 minutes.

But the first of Jones' penalties four minutes later earned Wasps a platform. And they took the lead when Johnson finished off a driving maul for a converted try.

Back came Gloucester with a Cook penalty before Jones surprisingly missed with a simple effort.

Gloucester fly-half Mills then hit a post with a penalty kick from inside his own half before Jones kicked an easy one to put Wasps in front at the interval.

After Cook missed badly with another penalty at the start of the second half, Tindall put the visitors back in front when he brushed aside Chris Bell to score a converted try.

Another Jones penalty reduced the arrears to one point before Vunipola picked up a loose ball to set up Wade's try.

Cook then again missed horribly with another penalty before being substituted with 12 minutes remaining, but his misses proved costly.

Vunipola smashed past two tackles from a scrum 15 metres out for the decisive try, converted by Robinson, who added a penalty. But Gloucester's late rally proved to be not enough.

"We haven't produced an 80-minute performance all season. We are far from the finished article and still have a long way to go. But we are having the rub of the green at the moment.

"We didn't play well for most of the game, perhaps for only 20 minutes, and we were extremely pleased to go in at half-time 13-10 ahead. Gloucester should have been a couple of scores in front.

"But, if you give Christian Wade a bit of space there are very few better. People underestimate his strength and power and he has great footwork.

"If he keeps performing like that he will no doubt get his opportunity for honours. His try was crucial as it gave us the momentum and confidence to go on and win."

"We controlled large parts of that match but we didn't take our opportunities, mainly in the first half.

"We made a number of errors and they took their chances, especially when we messed up a scrum to give Christian Wade the opportunity to score. That was the turning point in the match.

"I'm positive about today's performance as we are still in the hunt for the top four.

"We've taken six points from two difficult away matches. We have a good opportunity next Friday night against Worcester to kick on but they are a dogged team and don't give up easily."