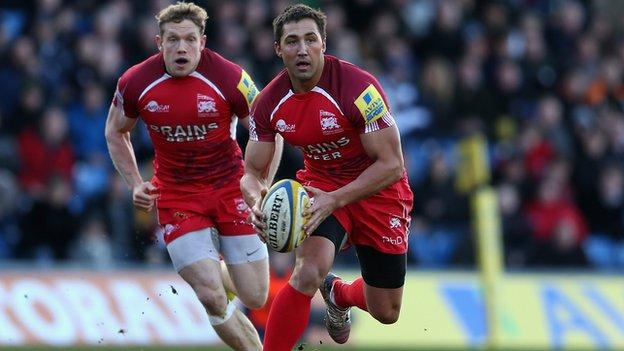 Danny Cipriani landed a 16-point haul to kick Sale to victory against London Welsh in the Premiership basement battle at the Kassam Stadium.

But tries either side of half-time from stand-in scrum-half Will Cliff and flanker Danny Braid gave Sale the edge.

And, after Danny Cipriani had kicked both conversions, as well as three penalties, for a 13-point haul, it was Nick Macleod, his late replacement at fly-half, who kicked what proved to be the winning penalty nine minutes from time.

In a dramatic finale, the Exiles could still have snatched victory had they not taken the wrong passing option in the last move of the match.

But bottom club Sale hung on to register their fourth straight win in all competitions, to lift themselves within a point of 11th-placed London Irish and three behind Welsh, who claimed a losing bonus point.

The Exiles came into the game desperate to erase a run of 10 defeats in 11 matches, their last victory having come at home to fellow strugglers Irish on 1 December. But, despite a quality performance from 31-year-old former Wales star Henson, who showed up well in his head-to-head with fellow headline maker Cipriani, it was the former England man who ended up on the winning side.

Henson's first penalty put Welsh 12-3 ahead just after the half-hour, yet they went into the interval a point behind after Cipriani landed his second penalty before starting the move that led to Cliff's touchdown.

When Sale turned a Welsh attack over in their own half, that gave Cipriani the chance to race downfield and he linked with winger Charlie Amesbury before receiving the ball again on the Exiles' 22, making ground before laying off for his scrum-half partner Cliff to score.

Sale then opened up an eight-point gap on Welsh straight after the restart when full-back Cameron Shepherd sent Baird over for a Cipriani-converted touchdown.

But Davies landed his fourth penalty to reduce the arrears to five points before a lovely ball from Henson inside the visiting 22 sent MacKenzie over from 15 metres, the resulting conversion and a further penalty by the Welshman giving the Londoners a five-point cushion.

But Sale would not lay down, Cipriani's third penalty bringing the Sharks back within striking distance before Macleod, was given the chance to boot the winning penalty from in front of the posts.

"I said before the game that this would go right to the wire and I still firmly believe so. Today we were on the wrong end of a one pointer. The game could have gone either way.

"We didn't take our opportunities when they arose but we picked up a bonus point that takes us a step closer to Worcester, in ninth.

"Before the game, we spoke about silly penalties and we were going well but then our knees buckled, Sale came back into it and then we were under pressure.

"A lot of Sale's points came from us not being too smart. It is dealing with pressure, which we are not doing at the moment."

"London Welsh are a good side. We thought we had got away at half-time but they came back, scored a penalty and got their try.

"For us, it was the fourth win on the trot and the momentum has helped us. We have remained injury-free and we have to look for survival.

"We are still bottom of the league as we sit here tonight and we have Harlequins and Leicester to come in the next fortnight. We've got a job on our hands and we are by no means out of the mire.

"I don't think any side that has been bottom of the league at Christmas has stayed up. But we've now beaten Exeter by a couple of points and London Welsh by a point and, if we can continue to do that, we'll survive by the skin of our teeth."