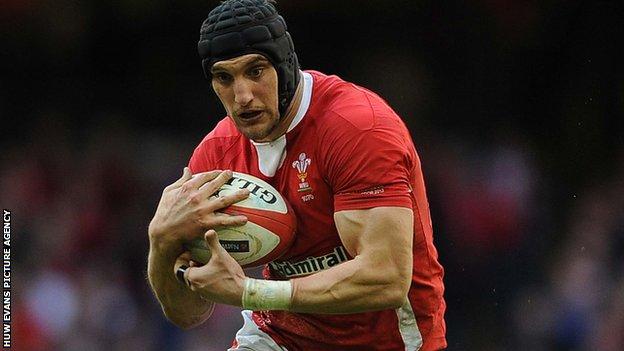 Sam Warburton's British and Irish Lions hopes will not be damaged by his omission from the Wales team to play Italy, claims interim coach Rob Howley.

Warburton, once favourite to be Lions captain, will miss his second successive game as Howley sticks with the same team that beat France 16-6.

But when asked if Warburton's absence could cost him a Lions place, Howley said: "I wouldn't have thought so."

Howley, who will be part of Warren Gatland's Lions coaching team on the tour to Australia, added: "Obviously Warren's got a high regard for Sam Warburton as a player and as a leader.

"And, obviously from a Lions perspective, you don't have to be playing international rugby or captaining your side to be involved with the Lions."

Warburton, Wales' 2012 Grand Slam captain, missed the 16-6 victory over France because of a shoulder injury and will not start against Italy in Rome.

Howley has already declared his intention to pick the same starting line-up which beat Les Bleus for the trip to Italy on 23 February, meaning Ryan Jones will continue as captain with Tipuric at open-side flanker.

Jones and Tipuric performed impressively in an effective Welsh back row, as Wales ended a run of eight successive defeats.

Warburton could be on the bench for Wales' clash in Italy and will only have games against Scotland and England to stake a claim for a Lions tour place.

Gatland has handed over the Wales reins to Howley for the Six Nations.

But former scrum-half Howley insists there has been no pressure from Gatland when it comes to Wales selection with the Lions in mind.

"Selection, by all the coaches, is what's best for Wales to perform," said Howley.

"The best for Wales to perform against Italy is to pick the side early on, something which we haven't done for a long time.