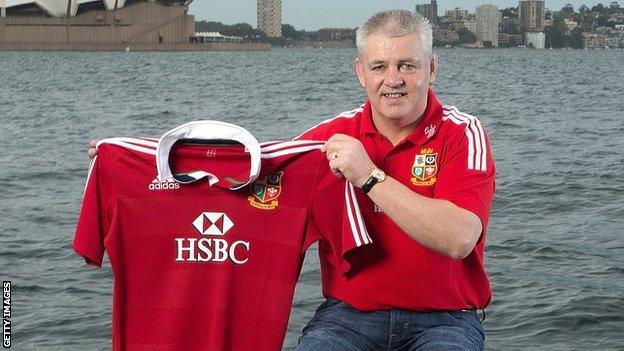 British and Irish Lions head coach Warren Gatland believes selecting too many English players for this summer's tour of Australia could put additional pressure on the squad.

England's position at the top of the Six Nations table suggests they will be well represented down under.

"[There are] other pressures that come with selecting a lot of English players," said New Zealander Gatland.

"At the moment England are playing well. They did well in the autumn, particularly the outstanding victory against the All Blacks.

"And, if they do well in the Six Nations, there will be a reasonable contingent of English players.

"[But] it becomes a much greater media focus from the English papers and potentially a negative focus from the Australian papers. And English players are targeted by other countries.

"They are not always the most popular with other countries because of the history. People like having a pop at them.

"We all know what happened with England at the World Cup and the circus that was created."

Gatland, who was speaking to the London Evening Standard, was referring to England's doomed campaign in New Zealand, which was dogged by off-field controversy.

Wearing the Lions shirt, whether captain or player, is something that all English players take very seriously

He later clarified his comments, telling the Daily Telegraph newspaper: "I am extremely disappointed that anybody should try to misinterpret what I said and try to say that will count against English players.

"The last thing I would ever do is limit the number of English players."

"I was lucky enough to be captain in 1980, Martin Johnson skippered the team to the famous 1997 series win, as well as leading the side for a historic second time, when going down to Australia," said former England captain Beaumont, who won 34 caps for his country between 1975 and 1982 and earned seven caps for the Lions.

"Wearing the Lions shirt, whether captain or player, is something that all English players take very seriously.

"This will undoubtedly continue for those that get picked this time.

"It is well documented the strong culture and sense of responsibility on and off the pitch that this England team possesses.

"Those fortunate enough to get picked will of course take those attributes Down Under."

Meanwhile, Gatland, who is taking a break from his regular job as Wales head coach to lead the tour to Australia, praised England fly-half Owen Farrell.

Farrell has propelled himself into Lions reckoning with assured performances against Scotland and Ireland and is now Irishman Jonathan Sexton's closest rival to start at 10 against the Wallabies.

"I've been impressed with his resolve, particularly in the last two games when he's played exceptionally well," said Gatland.