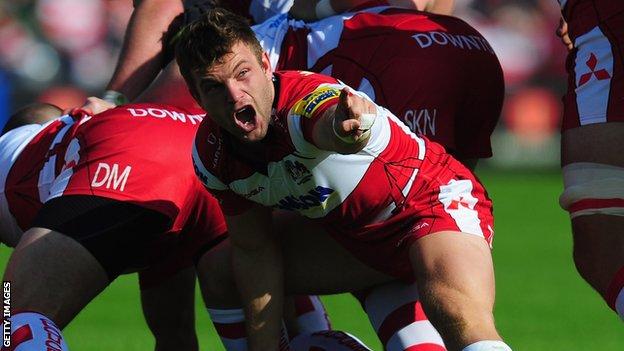 Lewis was on Exeter's books as a youngster and has signed a two-year contract at Sandy Park.

The 23-year-old has not started a Premiership game this season but made seven league starts last term and was out of contract in the summer.

"He's a quality player, but obviously with Jimmy Cowan here and the way that Dan Robson has been playing it's been difficult for him to get starts and opportunities.

"He's had a fair few opportunities, but for a player of his quality not enough, and sometimes when you have a lot of quality players in one position that's what happens."

Lewis is a former England Under-20 international and played at the 2009 Junior World Cup, having moved to Gloucester from Exeter as a 17-year-old.

"It's never easy to say goodbye at any time," said Lewis. "But I do feel the time is right for me to try a new challenge and going to the Chiefs will hopefully bring the best out of me.

"It's exciting and I am really looking forward to the move. In a strange way it's like going home for me because I still have my family and a lot of friends down in Devon."

With Haydn Thomas and contracted for next season, the move casts doubt on the Exeter futures of Kevin Barrett and Junior Poluleuligaga.

Both players are out of contract in the summer, with Samoan international Poluleuligaga only featuring three times this season after a fell through due to visa issues.

Barrett has made just two starts this season, getting the nod in Exeter's final two Heineken Cup matches against Clermont Auvergne and Leinster, as well as seven games as a replacement.

"Dave is a young guy with bags of Premiership experience already and things have changed a little bit at Gloucester with Jimmy Cowan turning up there," said Exeter boss Rob Baxter.

"He's a local guy and if he was based at Ivybridge now in our academy, he would never have gone through our fingers and would be playing at Exeter so it's nice to get a local lad back.

"We've got Haydn and Will Chudley under contract who are very good, attacking, high-tempo scrum-halves and I think Dave will really add to the mix there.

"He's certainly coming down to try to challenge for a starting spot and that's what we want, we want as many players in each position who can push on and try to prove something within our squad."