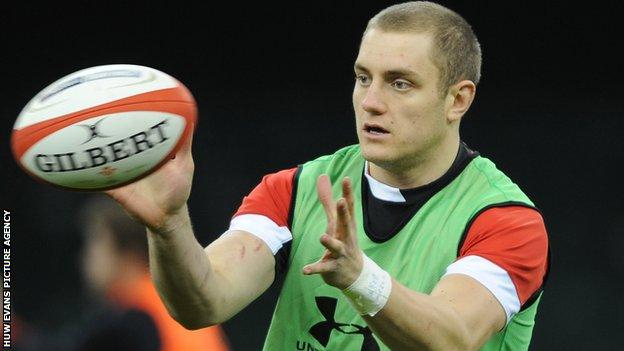 Ospreys flanker James King says he has been inspired by Andrew Coombs' performances for Wales in the Six Nations.

Coombs has impressed in his two appearances so far while King is still waiting for his first Wales cap.

"If you look at how he's played his first two games he's been outstanding," King said.

"He's been one of the best players in the team. His work-rate's phenomenal in the game.

"I think that anyone who doesn't get picked is obviously going to be disappointed. All I can do is just play as well as I can."

King will take some inspiration from Coombs' selection for Wales because they both share the rare "utility forward" tag and can play in the second row and back row.

Both have focused on playing lock for their respective regions this season and were called up to Wales' 35-man Six Nations squad.

Coombs was handed his opportunity after Luke Charteris and Bradley Davies were ruled out of the Six Nations and Alun Wyn Jones and Ian Evans struggling with injury.

The 28-year-old will retain his place in the second-row for the next game in Italy with interim coach Rob Howley keeping faith with the side which beat France 16-6 in Paris.

That means captain Sam Warburton, who missed the French game with injury, will miss out when Wales travel to Rome on 23 February.

King and team-mate Alun Wyn Jones are among the players who have been released by Wales and are available for Ospreys' Pro12 clash against Connacht on Friday.

King, 22, acknowledges the competition for places is fierce among the forwards but says playing for the Ospreys will give him a chance to make an impression.

"There's going to be great competition for any place. Everyone wants to play and everyone is going to try and do their best," King added.

"But he's [coach Howley] come out and said: 'If it's a winning team, why would you change something that's not broken?'"

"We've been released to come back and play this week so it gives us good preparation to back to our regions.

"Obviously coming back to the region we've got a job to do because we've got a title to defend."

Although still waiting for his international debut, King has enjoyed his time with the Wales camp and has targeted the summer tour to Japan.

"It's been a really good experience being around the boys and see what the environment is like.

"If I'm given the opportunity to go on that tour I'll obviously be delighted.

"But at the moment I'm just trying to keep my head down, train as hard as I can and whoever I'm picked to play for I do my best job for them."