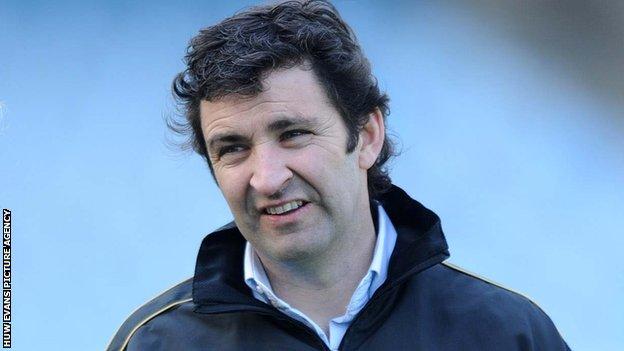 Ospreys chief Andrew Hore has highlighted how Wales' player-drain has an impact on the Welsh regions during the Six Nations.

The Ospreys Chief Operations officer points to prop Ryan Bevington not being released by Wales to play for the Ospreys against Connacht.

You are paying wages for players who can be away for up to a third of the season, and then you have to find additional wages for the players who are standing in for the absent internationals

"You are paying wages for players who can be away for up to a third of the season, and then you have to find additional wages for the players who are standing in for the absent internationals.

"At a time when money in the regional game is increasingly tight it does have an impact on competitiveness. You can't escape that fact.

"To further complicate matters, Ryan Bevington isn't being released to the Ospreys as Gethin Jenkins and Paul James have to return to their respective clubs in France and England.

"We totally understand that, but it does stretch us even further, and is a real example of the issues that get thrown up when players leave Wales to play outside of our borders.

"It's frustrating because we have a young man, who needs more rugby and would benefit from more regular rugby, has to sit and watch those guys play while he doesn't get the opportunity.

"Potentially, it would be of far more benefit if one of the starters for the national team had the rest and Ryan played."

Bevington is third-choice loosehead prop, behind Jenkins and James in the Wales set-up, and was not in the matchday squad for the defeat to Ireland or the victory over France.

And he is not playing this weekend because of the possibility Jenkins (Toulon) or James (Bath) could be injured while on duty for their clubs.

The reigning Pro12 champions recorded an impressive 16-12 victory over Ulster to inflict only the second defeat of the season on the current Pro12 leaders, with Bevington scoring a vital try.

But the Ospreys, who are without 23 players due to international duty and injuries, have captain Ryan Jones, prop Adam Jones, fly half Dan Biggar, flanker Justin Tipuric, lock Ian Evans, hooker Richard Hibbard all on Wales duty.

While Alun Wyn Jones and lock James King have been released by Wales and are available to play for the Ospreys against Connacht. Hore said the Ospreys had increased their investment in developing home-grown players by 600 per cent.

He pointed to the overseas talent of Ruan Piennaar, Johann Muller, Jared Payne and Nick Williams in Ulster's ranks and how those overseas players underpin the Irish provinces when players are away on international duty.

Welsh caps awarded since regional started in 2003 up until the 2013 Six Nations.

A total of 2417 Wales caps have been awarded since the start of regional rugby.

"The funding of the game in Ireland means that the teams there are operating on bigger budgets which allows them to keep local talent and secure quality overseas signings to complement the homegrown talent that is at all four provinces during the international windows," added Hore.

"It's no coincidence that five of the last seven Heineken Cups have been won by Irish teams, that last season's final was an all-Ireland affair, or that once again, 25 per cent of the semi-finalists come from Ireland while you have a third Irish side in the last eight of the Amlin.

"Being able to create and keep real strength in depth with the addition of quality overseas players allows you to compete on all fronts."

Hore believes the new Professional Rugby Game Board can play a key role in addressing the issues in Wales.

The board was formed by the WRU and the regions at the end of 2012 with the aim of overseeing the professional game.

Hore is stressing he appreciates and sympathises with national coaches, Rob Howley and Robin McBride.

But, he says, the dilemma of international player management is among a raft of issues, like the impact Premier League football on rugby in south Wales, that the PRGB should be dealing with promptly.

"The key thing for us to get Roger Lewis' PRG Board up and running," added Hore.

"We're really hopeful that it will address some of these issues and we can look forward to coming to some conclusions which are good for the whole game and find out what clarity and what purpose we as a region serve."

Hore's stressing that he appreciates and sympathises with national coaches, Howley and McBride. But, the dilemma is among a raft of underling issues (like the threat from Premiership Football) that the PRGB should be dealing with promptly.