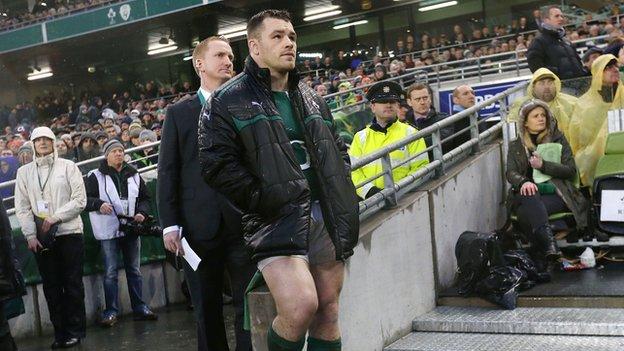 Ireland rugby chiefs are considering an appeal against the three-week ban Cian Healy received for a stamping incident in the Six Nations defeat to England.

The prop pleaded guilty to stamping on England's Dan Cole during Sunday's 12-6 defeat when attending a disciplinary hearing in London on Wednesday.

Healy is set to miss the Six Nations games against Scotland and France.

The IRFU are waiting to receive the written judgement on Monday before deciding whether to appeal.

Healy was given a mid-range sanction of five weeks, but the disciplinary committee allowed two weeks of mitigation.

That should have left Healy clear to play against France on 9 March - but the committee decided to implement an IRB regulation to defer the suspension for one week to ensure the player would miss two games.

However, this led Leinster to consider using the prop in Saturday's Pro12 game against Treviso.

Ireland coach Declan Kidney was told at Wednesday's disciplinary hearing that Healy would not be available to play this weekend but Leinster had indicated that they may consider selecting him.

"It's certainly an option that he could play for Leinster this weekend, but we've been told that he's suspended and he's not allowed to," said Kidney.

"We asked the question yesterday whether he could play this weekend and we were told no, he is suspended."

"Personally I'd be delighted to involve him, he's a really big asset. He will definitely be considered," added Gibbes.

"There's are complications for others maybe, but he's available for us."

A statement from the Six Nations Disciplinary Committee released on Friday confirmed that Healy would not be available to play for Leinster or Ireland until 11 March, pending an appeal.

In Healy's absence, Ulster loose-head Tom Court has been called in to the Ireland squad.

Munster's Dave Kilcoyne is expected to start in Murrayfield against Scotland on Sunday, 24 February, with Court among the replacements.

Court will play in Ulster's Pro12 league match against Zebre on Friday night and then join up with Declan Kidney's squad in Dublin on Sunday.