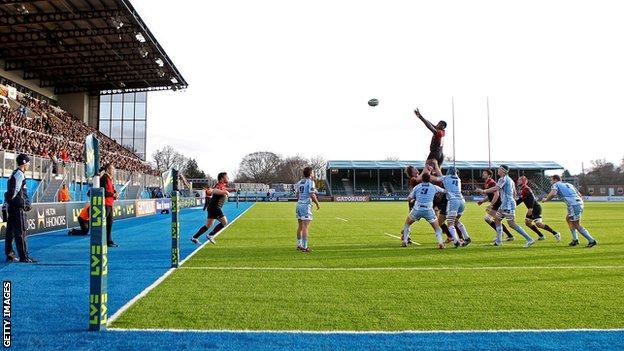 Exeter boss Rob Baxter says he has not making any special preparations ahead of the first Premiership game to be played on a synthetic surface.

The Chiefs are the first league visitors to Allianz Park, which is the first to have

"Your programme is based on what you want to achieve for the season."

Saracens have already played one game on their new surface,

And Baxter does feel his players may have to adapt some aspects of their game as they get used to playing a match on a non-grass surface at the 10,000 capacity venue.

"Some of the scrum issues will be slightly different," said Baxter.

"It'll be very firm under foot so you've got to anticipate there won't be too many slipping and sliding, and your first body shape and first contacts in the scrum will be important and we'll talk about that.

"We know it's going to be a fast surface so the speed of the game will be pretty quick.

"But I actually think the guys are looking forward to it. We're a firm-pitch side and the guys like to get on the move and I think it'll suit us as much as it'll suit any other team in the Premiership."

Exeter and the 2011 champions will be without quintet Owen Farrell, Brad Barritt, Chris Ashton, Andy Goode and Mako Vunipola, who are unavailable due to their England Six Nations commitments.

"But there's also a reality that they're one of the strongest squads in the Premiership.

"It'll be a big occasion for them, they'll be highly motivated for the first Premiership game in their new ground, but our motivation has to match their motivation."