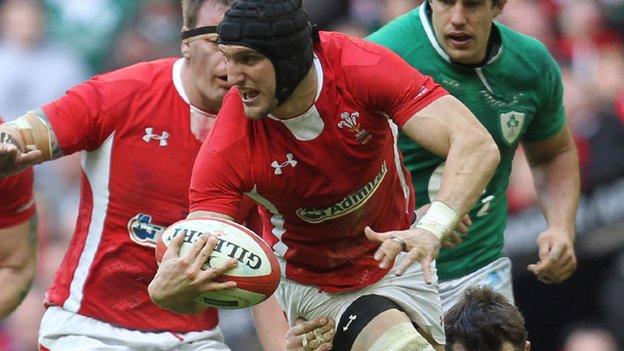 Sam Warburton can emerge from his troubled Six Nations campaign a better player, according to Wales forwards coach Robin McBryde.

Warburton missed the 16-6 win against France with a shoulder injury.

And the Blues flanker will not start against Italy on 23 February after Wales opted to stick with the starting XV that beat the French.

But McBryde expects Warburton to bounce back: "[He] will come back a stronger and a better player," he said.

The former Scarlets and Wales hooker suggested the break might work in the favour of Wales' 2012 Grand Slam captain.

"It will be interesting to see how Sam reacts on the field," said McBryde.

"You can look at it as a positive.

"When you are away from the coalface you are able to weigh up everything and put things in the right boxes.

"I am sure Sam is able to do that. You let somebody else take the responsibility and the burden.

"You can look at your own game in a bit more detail, think about where you are going wrong and what you need to improve on. Then, it is a matter of executing that

"I'm sure that Sam will benefit from it and will come back a stronger and a better player."

Warburton was captain for the opening match against Ireland in Cardiff when Wales lost 30-22 - his seventh successive defeat as captain, and the team's eighth.

His injury opened the door for Ospreys open-side flanker Justin Tipuric, who impressed as Wales ended their losing streak.

Ryan Jones' captaincy also drew praise, and speculation about Warburton's chances of regaining his place had started even before interim coach Rob Howley made his surprise early team announcement.

Tipuric and Jones will start again in Rome. However, Wales have yet to name their replacements and Warburton is expected to be on the bench if he proves his fitness.

And the player will be given every opportunity, according to McBryde, who said: "He's going to be put through his paces.

"At the moment it's all positive. He's in the gym, he's working on a one-to-one basis with the medical team and everything's going in the right direction."