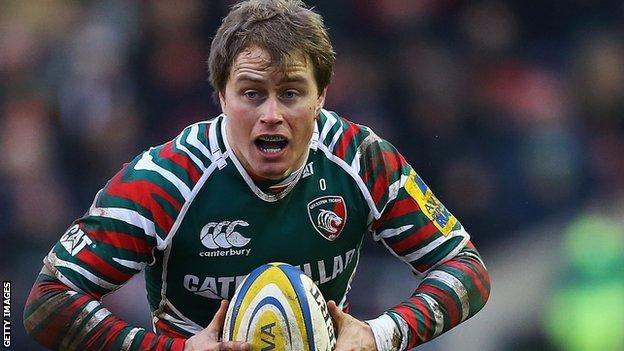 Leicester Tigers full-back Mathew Tait says he has not given up on earning an England recall.

Tait, 27, made the last of his 38 international appearances in 2010, but has since been plagued by injury.

He has been in contact with England head coach Stuart Lancaster since making his latest comeback for Tigers, playing 13 games since November.

"I would love to play for my country again, but that only comes from playing every week and doing well," Tait said.

"I've spoken to Stuart, but it has not really been at the forefront of my mind," he told BBC Radio Leicester.

"I've always said that if I'm playing well here, then the rest takes care of itself as and when or if I'm needed."

Before his recent injury-free run for Leicester, Tait endured 13 nightmare months with the club as he struggled to recover from a groin problem.

He made just three appearances in his debut season at Welford Road last term after his move from Sale Sharks.

"It has been nice to get a run of games," Tait said.

"I can't remember the last time I played this however many games back-to-back - I'm just enjoying it."