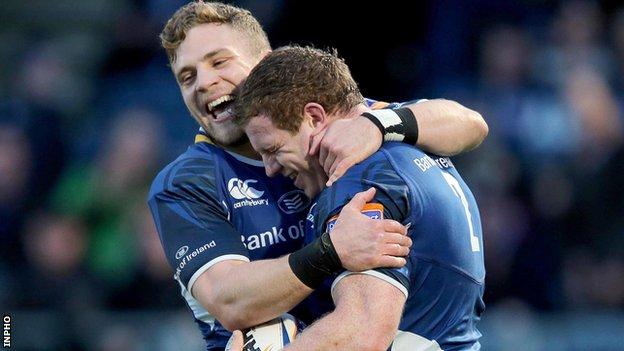 Ryan and Cronin both notched two tries in the opening 27 minutes with Ian Madigan's extras helping the home side to a 26-0 lead at the interval.

Flanker Ryan completed his hat-trick early in the second half before Ludovico Nitoglia replied for Treviso.

However, Leo Auva'a added a sixth try for Leinster late in the game.

The win moves Leinster to within two points of second-placed Glasgow Warriors in the table.

Joe Schmidt's charges started the game with the clear intention of attacking Benetton Treviso from the word go and following some excellent early pressure in the Italians' half, they were rewarded with a 10th-minute try.

The industrious Ryan reached over in the corner at the end of a long spell of play on the right wing although Madigan was off target with the difficult conversion.

After Madigan slotted the conversion, fly-half James Ambrosini missed a chance to open Treviso's account and further salt was rubbed into the visitors's wounds by Ryan's second try after a line-out drive.

Leinster repelled some Treviso pressure before the break and Ryan ran in his third try six minutes after the restart following good work by the home pack.

To their credit, Treviso kept battling and winger Nitoglia finished off the fine move in the 49th minute.

The home team became somewhat ragged after the introduction of several replacements but Auva'a, who had come on for Jordi Murphy, did make his presence felt with a 69th-minute try to round off a comprehensive Leinster victory.