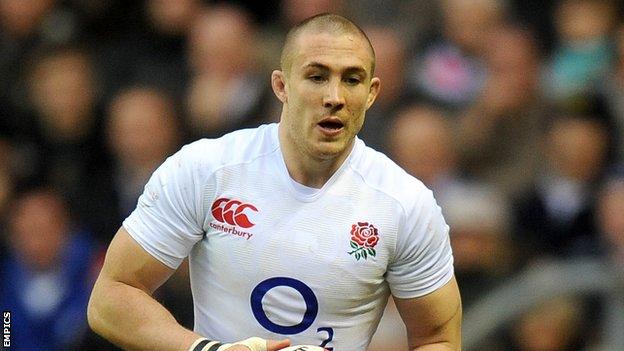 Mike Brown has thanked Harlequins director of rugby Conor O'Shea for his return to the England squad.

The full-back, 27, spent four years out of the national set-up until he was recalled to face Scotland last year.

Brown told BBC London 94.9: "Conor promised me I'd get back in the England team if I stuck with Quins.

"When he turned up I was coming to the end of my contract and wasn't sure whether I'd stay. He has been working hard with me on what I can improve on."

Brown: "He is a great mentor to have. He has been there and done it for Ireland.

"He is easy to talk to when I need to and is great to have someone who played the same position as me to bounce ideas off.

"He is so positive and easy to talk to."

Brown played two Tests in South Africa in 2007 and one in New Zealand the following year but then fell out of the England reckoning.

He made eight appearances for the side in 2012 and has started the last four Test matches.

Brown can also operate on the wing and it is in that wide role that he has featured against Scotland and Ireland in the Six Nations this year.

"I have played on the wing a few times for England now," he said.

I have tried to go out, play my game and try and repay the trust Stuart Lancaster's shown in me to put me in a different position

"I have grown into the role and obviously there is still a lot to do. I am working hard to do that on the training ground.

"Stuart [Lancaster, England head coach] picking me and getting me on the field has given me massive confidence.

"I have tried to go out, play my game and try and repay the trust he's shown in me to put me in a different position and get me on the field."

England sit top of the Six Nations table after wins in their opening two games but Brown says the side are concentrating on the visit of France this weekend rather than dreaming of completing a Grand Slam.

"As a group and individually, we just try and take each game as it comes," he said.

"We are just focusing on who we have got next, which is France. It is going a massive test.

"They can beat anyone on their day and have got world-class players throughout their squad.

"Once we've reviewed the Ireland game and looked at where we can improve we'll look at France and focus on putting a good performance in."