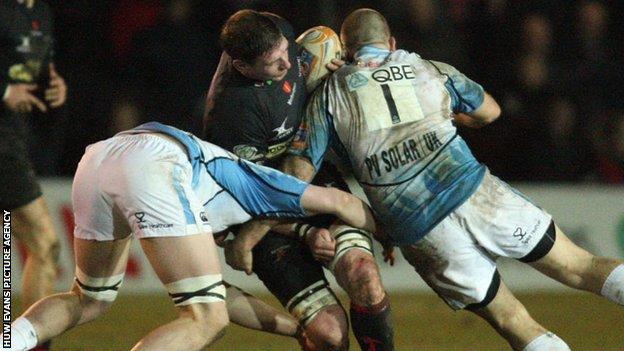 Coach Darren Edwards has said he will not consider his position after his side's record Pro 12 defeat against Glasgow.

The Warriors scored eight tries in a 60-3 thrashing of the Welsh region.

It was a record league win for Glasgow, whose 57-point winning margin was the biggest for an away team in the tournament's history.

"I have come from a professional playing background and I just have to fight," said Edwards.

"That's all I'm thinking about is fighting to put that (defeat) right."

Edwards admitted he was "embarrassed" by the Dragons' capitulation which saw them booed off Rodney Parade.

"We're embarrassed, you can't hide away from the facts of that... I'm embarrassed because that was my team out there," said Edwards.

"There's got to be a response from what happened here tonight [Friday] and I'll be expecting that next week.

"Every game's going to be important that we can actually prove to ourselves and to our fans now what we're actually trying and striving hard to achieve.

"We've just need to keep working hard. Glasgow gave us a lesson in why they're top of the league and we've just got to keep trying to get to these standards."

The Dragons went into the match on the back of three successive wins and took an early lead, but Glasgow were in a different class.

They led 27-3 at half-time and cut loose to score five tries in the last 20 minutes of a one-sided encounter.

It left Edwards visibly upset and with a message to the Rodney Parade faithful: "It's a huge apology, it's an embarrassment. Nobody wants to be associated with that.

"I think it's important we're looking at the whole organisation and trying to put things in place.

"We'll take a harsh look at everything. We want to be successful and we'll do everything we can to do that.

"I've come from a professional playing background and I've just got to fight. All I'm thinking about is fighting to put that right now."

The Dragons are second from bottom and face an away trip to face bottom side Zebre in their next game on 24 February.