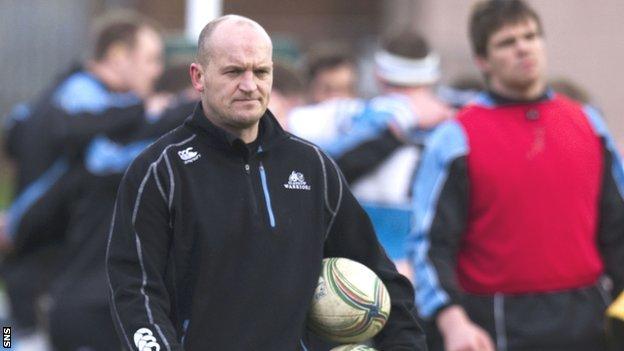 Gregor Townsend admitted he struggled to come to terms with

"It's hard to get our heads round it," the head coach told BBC Radio Scotland.

"We'd prepared really well for a very tough game. We realised that no Scottish team had won down there in the Rabo in five seasons.

"It was one of those nights when we came out with good intent in defence and attack and everything clicked."

The Scots ran in eight tries at Rodney Parade in the RaboDirect Pro12 after going behind to an early Tom Prydie penalty.

Those scores gave them the biggest win, home or away, by a Scottish team in the professional era.

"The way Dragons had been playing in recent weeks we knew it would be a tough game," added Townsend, in his first season with Glasgow.

"When you get to a stage where you get three or four tries and you've won the game, the opposition force things and we capitalised on that and played some really good rugby in the last 20 minutes.

"I am really proud of the players and delighted for them. They have worked really hard throughout this season.

"Last night we had some players who hadn't played many games for us. Mark Bennett became the 50th player to play for us when he started.

"It was great to see them playing well and making the most of the opportunity.

"We knew a game like that was hopefully going to come this season."

The victory in Wales helped cement Warriors' second place in the Pro12 table.

Now, though, Townsend is looking ahead to the game against table-toppers Ulster at Scotstoun, followed by a series of tough encounters as the team tries to maintain their lofty position ahead of the play-offs.

"We know we have some very tough games coming up ahead," added the former Scotland back.

"We play the top seven teams over the next eight games, starting with Ulster on Friday, who are the top team just now.

"We know it's going to be a battle right down to the last couple of games.

"The top six were very close going into this weekend, only about four or five points separating second to sixth, so winning last night has helped our position.

"The Ospreys lost over in Connacht and Scarlets and Munster play tonight.

"We know we have hard games coming up against rivals for those play-off positions.

"Our goal is to get a home semi-final because that would be great for the supporters of rugby in Glasgow."