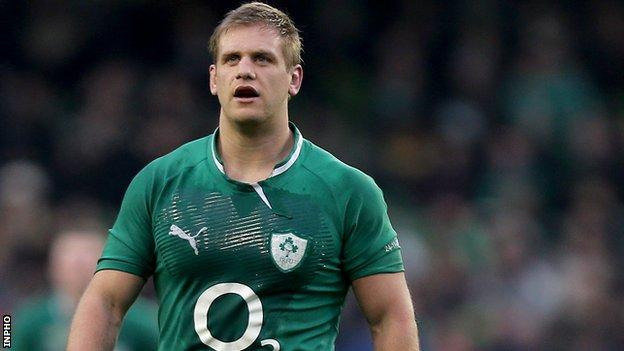 Chris Henry has had to withdraw from the Ireland squad for Sunday's Six Nations clash with Scotland because of a knee injury.

The 28-year-old flanker was hurt during Ulster's win over Zebre on Friday and a scan has revealed he suffered a cartilage tear to his right knee.

Henry will need surgery and Ireland management said he would be out of action for about four weeks.

That could mean he may miss the rest of Ireland's Six Nations fixtures.

Munster back row Tommy O'Donnell has been called into the squad as cover.

Connacht centre Dave McSharry is also unavailable as he is still suffering from a niggling groin injury, so Ian Madigan has been brought into the Irish camp.

Henry came on as a replacement in both of Ireland's opening Six Nations matches - the win over Wales, and the defeat by England.

Meanwhile, Ulster centre Luke Marshall is in contention for his first Six Nations appearance after being added to the Ireland squad on Sunday.

Marshall has been called up despite sustaining bruising to both his thighs in the Pro12 match against Zebre.

Ronan O'Gara, Paddy Jackson and Madigan are vying for the fly-half position against Scotland.

With Jonathan Sexton ruled out by injury, the 127-times capped O'Gara was expected to start next weekend but the 35-year-old's poor performance for Munster against the Scarlets on Saturday may be a cause for concern for the Irish management.

With Mike McCarthy ruled out, Donncha O'Callaghan and Donnacha Ryan look likely to start in the second row at Murrayfield with Ulster's Iain Henderson in contention for a role on the bench given his ability to play either at lock or in the back row.

Other Ulster players Tom Court and Declan Fitzpatrick join provincial team-mates Rory Best and Craig Gilroy in the squad but Andrew Trimble is again left out with Leinster wings Luke Fitzgerald and Fergus McFadden instead included.

Marshall has been in good form for Ulster in recent weeks and was part of an Ireland XV which defeated Fiji at Thomond Park in November.