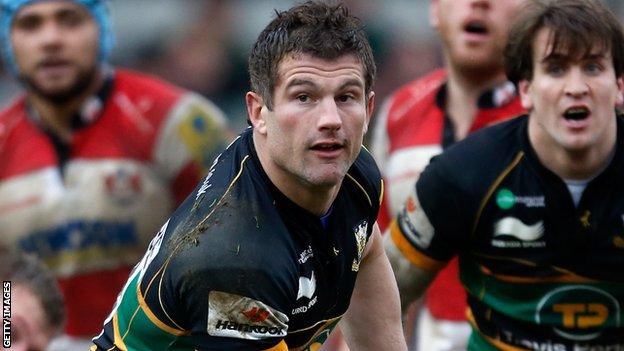 Northampton Saints centre Tom May has praised the club's forwards for their contribution to the win at Worcester.

They won 27-18 at Sixways with Samu Manoa finishing off a maul and Saints also scoring a penalty try.

May told BBC Radio Northampton: "It was one of those games to dig in and hopefully come away with a win.

"You've got to admire the group of lads we've got up front. When they get it together, they're tough to stop moving forward.

The 33-year-old, who was making his 20th appearance of the season, added: "As a back, it's pretty frustrating not being able to get the ball and have a run.

"But the forwards created a platform for us to come away with the win and we just had to defend well at the back and keep putting pressure on Worcester with our kick chase."

Saints, who have now moved up to fifth, were looking to make amends for 27-11 defeat by Gloucester at Franklin's Gardens and May says that criticism of the team has motivated them.

"There's no more pressure than the pressure we put on ourselves," he said.

"We've had a bit of a duff few weeks. You get written off in certain parts of the press and that helps to drive you on. Most of all, we want to be doing it for the people in this group."

"I do a lot of reading on stuff like that, trying to get into business coaching and life coaching," he said.

"I get a fair bit of stick from the lads. [Saints fly-half] Ryan Lamb hates that those quotes have made the club programme, which I think is brilliant.

"It's not for everyone but there's a lot of people who seem to take a bit from it."