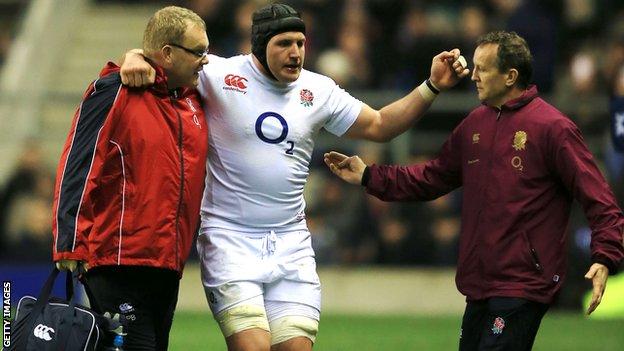 England coach Stuart Lancaster believes number eight Ben Morgan will play some part in the rest of the Six Nations.

The Gloucester forward is recovering from an ankle injury sustained against Scotland but Lancaster is hopeful he can return against Italy on 10 March.

"Ben will be fine," he said. "It's similar to the one Manu Tuilagi was out for four or five weeks with and Ben will be about the same.

"He wants to get himself right so he can push for selection against Italy."

Tom Wood moved from flanker to number eight in the 12-6 win over Ireland in Dublin, with James Haskell - who missed training on Monday because of flu - coming into the side in place of Morgan.

Gloucester fly-half Freddie Burns could also be in contention against the Azzurri but like Morgan, misses Saturday's game against France at Twickenham.

"Freddie is further down the line, but they won't play this weekend so it will be another week or so," Lancaster added.

London Irish centre Jonathan Joseph has been ruled out for two weeks with a toe injury, but full-back Ben Foden has made good progress in his battle with ankle damage and will play for Northampton against Bath on Saturday.

Wasps' centre/full-back Elliot Daly, plus Saracens flanker Will Fraser and centre Joel Tomkins, were all drafted in for training this week as cover for Foden, Morgan and Joseph respectively.

Fly-half Toby Flood also missed training on Monday because of a tight calf, with Lancaster scheduled to confirm his match-day 23 on Thursday.

France currently lie bottom of the Six Nations table after two defeats, with table-topping England hoping to take a big step towards a possible Grand Slam with victory on Saturday.

But Lancaster said: "It's a bit early to say that France are suffering. There's no doubt they have a very strong club programme and their club teams are very good.

"If you look at their performances in the autumn, the three wins over Samoa, Argentina and Australia show France are not a bad side.

"If you go through the players who will play against us and when you see them in their club colours they are good, experienced, tough, big, physical players. So it ain't going to be easy."

Lancaster added: "You definitely get a backs-against-the-wall mentality when a team is in the position where they are. You want to prove a point.

"France having lost two games and coming to Twickenham with nothing to lose in their minds is a pretty dangerous proposition."