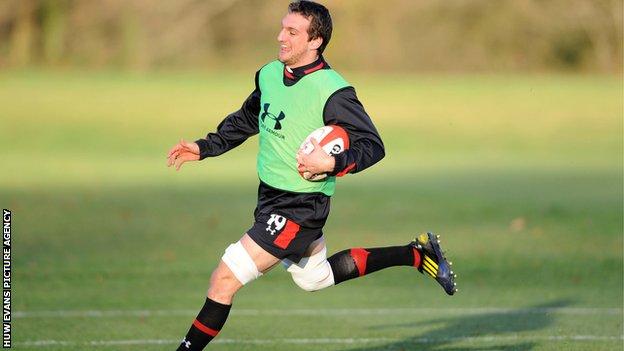 Sam Warburton and Alun Wyn Jones took a full part in training on Monday ahead of Wales' Six Nations clash in Italy.

Warburton, Wales' Grand Slam skipper in 2012, missed the 16-6 victory over France with a shoulder injury.

Lock Jones has returned to the Wales squad after also being out with a shoulder injury, since November.

"They are looking pretty healthy, but the final decision is with Rob [Howley] and the physios if they pass them fit," said defence coach Shaun Edwards.

Howley, the interim Wales coach, announced last week that the side which beat France will remain the same for the trip to Rome, but Warburton and Jones could both return on the bench, with Howley confirming the replacements on Tuesday.

Warburton missed out on selection for the win in Paris after he picked up a 'stinger' shoulder injury (nerve damage) in the 30-22 defeat to Ireland in Cardiff.

Justin Tipuric replaced Warburton at open-side flanker and impressed sufficiently to retain his place, while Ryan Jones - who took over as captain - also performed strongly at blind-side.

Lock Alun Wyn Jones suffered a shoulder injury during the autumn defeat to Argentina, but made his return to action for the Ospreys as a replacement in their win over Ulster on 8 February.

The return of the experienced 27-year-old, who has won 67 caps, is a major boost for Wales, who are without second-rows Bradley Davies and Luke Charteris through injury.

But Jones's Ospreys colleague Ian Evans and Dragons lock Andrew Coombs have both impressed in the second row so far this campaign.