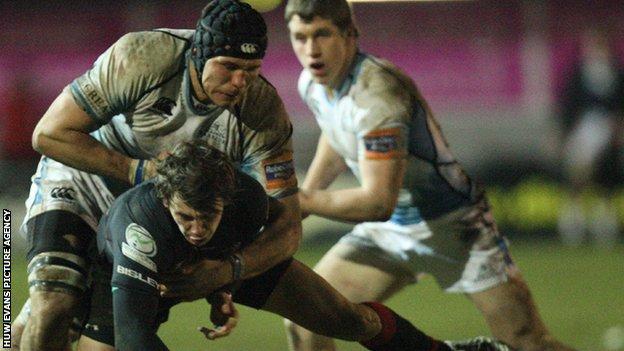 Chairman Martyn Hazell admits the Newport Gwent Dragons coaches could be the "problem" after their record Pro12 defeat to Glasgow.

The Dragons suffered a humiliating 60-3 loss to the Warriors at Rodney Parade.

Coach Darren Edwards admitted he was "embarrassed" by the Dragons eight-try defeat.

"We have to go through it with the coaches and see what they think is the problem, or they may be the problem anyhow," said Hazell.

We have to discuss it as a board to see where we are. I think something will have to be done somewhere along the line

The Dragons' defeat was a record win for Glasgow and the 57-point winning margin was the biggest for an away team in the tournament's history.

Edwards has ruled out any suggestions that he was considering his position as Dragons coach after the defeat.

He is in his second full season as coach after he replaced Paul Turner as Dragons head coach in February 2011.

Hazell admitted it may be a time for a change at the helm at Rodney Parade, but any changes will be made in the summer.

"There is no point in changing at this point in the season," said Hazell.

"It's not a small problem... it needs a really good look at.

"We have to discuss it as a board to see where we are. I think something will have to be done somewhere along the line."

Hazell admitted he was at a loss to explain the manner of the Dragons' defeat.

"It's another loss, but the biggest we have had in years," said Hazell.

"The players didn't play, it was a good Glasgow side and we cannot take that away from them, but they [the players] didn't put their heart into it.

"I don't know why. We will have to look at it to see what the problems are."

Hazell did admit there were plans to bolster a young Dragons squad with some experienced professionals in the summer, but claimed finance would dictate the quality of the signings.

"It is all to do with finances, the whole four regions in Wales because we are all strapped for cash and we just have to make do with what we have got," said Hazell.

"We have allocated more money to the coaching staff to bring outside-halves and a front row, but we have not got very far on recruitment at the moment."

Hazell has poured cold water on mounting speculation that the Dragons will become a development region.

"We have a participation agreement with the WRU for the next two years and legally that cannot alter that," said Hazell.

"They cannot downgrade us to a development region because of the participation agreement.

"We are all equal with that and that's for the next two years. It's a legally-binding document."