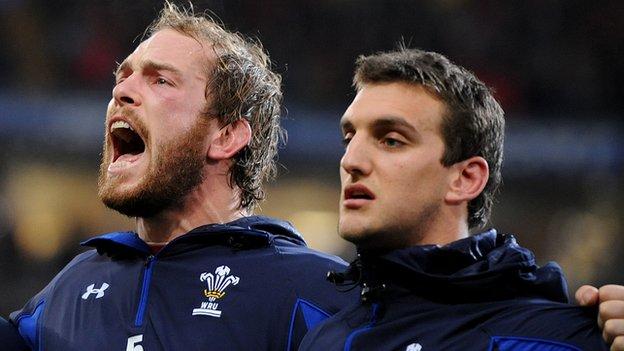 Sam Warburton and Alun Wyn Jones are set to make their Wales returns off the bench when they take on Italy in the Six Nations in Rome on Saturday.

Flanker Warburton, who led Wales into the tournament, missed their because of a shoulder blow.

Justin Tipuric stays at open-side, but Warburton has backed coach Rob Howley's decision to name the same starting XV three days after the win in Paris.

Ospreys lock Jones (shoulder) is back after being injured in November.

Amid a second-row injury crisis that preceded the tournament, Newport Gwent Dragon Andrew Coombs, 28, came in to win plaudits for his debut against Ireland and the clash against France.

Coombs holds on to the number four jersey so British and Irish Lion Jones must bide his time as a replacement.

Another Osprey, Ryan Jones, will again lead Wales having taken over from Warburton against France.

Howley said: "We announced last week that we would reward the starting XV that beat France by keeping faith with the same line-up for this weekend's game.

"The side is fit and raring to go and on the bench we have brought in Sam (Warburton) and Alun Wyn (Jones), who have both returned from injury which is a boost to the squad.

"In France the players showed real determination and resilience and we will need that again in Rome.

"Italy have already showed so far in this campaign what they are capable of, so we know the challenge we will be facing on Saturday."

After suffering an opening the title holders bounced back with a gritty win over France to remain in contention ahead of the third round clash at Stadio Olimpico.

Italy kicked off their campaign with victory over France before succumbing to Scotland at Murrayfield.

The hosts could be without skipper talisman Sergio Parisse, who faces a disciplinary hearing on Wednesday, 20 February after being sent off for club Stade Francais at the weekend for allegedly insulting the match referee.