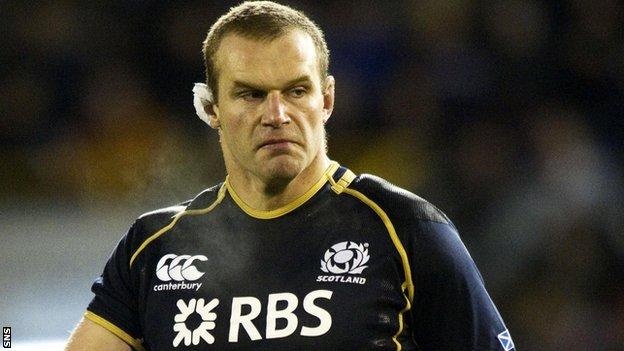 Geoff Cross has replaced Euan Murray, who refuses to play on Sundays for religious reasons, in the Scotland line-up to face Ireland on Sunday.

The Edinburgh prop will make his first start of this year's campaign.

The move is interim head coach Scott Johnson's only change from the team which beat Italy at Murrayfield.

"We've kept changes to a minimum and are saying to the players: 'You've won one game. Now go out show us you can win another'," he said.

And, despite the convincing nature of that 34-10 victory over the Italians, Johnson stressed that further improvement was required for a first home Six Nations win over Ireland since 2001.

"We have to improve on our last game and that's been our theme at training all week," he said.

"I make no apology for saying again that we have to step up our work in the contact area. Yes, we've some talented athletes in the squad, but we have to give them the opportunities.

"It's good to see players challenging for selection - and there are a number consistently putting their hands up, which is exactly what we want to see.

Cross, 30, was named man of the match in Scotland's win over Ireland in a World Cup warm-up match in 2011.

"It is frustrating to be on the edge of a squad as a reserve or, even more frustratingly, as a 23rd-man," Cross told BBC Scotland.

"You put in all the work and you prepare alongside all the other guys and then, when it comes to the competition that everybody loves to be part of, you're on the edge and you're waiting. That's a difficult place to be.

"There's an opportunity now to show the coaches why I should be picked, there's also a risk that I give them reasons to tell me why they don't intend to pick me in the future. The trick for me is plenty of the former and none of the latter."

In the replacements, hooker Dougie Hall has recovered from knee injury to return and Warriors teammate Jon Welsh wins a place on the bench.

Former captain Alastair Kellock could win his 50th cap if he comes off the bench.