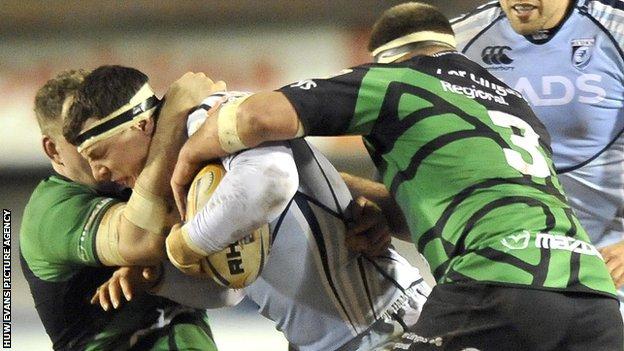 Connacht dented Cardiff Blues' Pro12 play-off hopes with their first away win over the Welsh side in the competition.

The hosts went into the game delighted at the

But tries by Danie Poolman and Willie Faloon to which Miah Nikora added 11 points proved too big a hurdle.

The home side were 12-down by the sixth minute as Poolman and Faloon caught them cold with Nikora adding a conversion.

But while Phil Davies' side did well to come back into contention and go in front midway through the second period, Connacht were able to secure victory.

The only occasion Connacht had previously managed a win in the Welsh capital was in the pre-regional era, when current coach Eric Elwood kicked them to a 6-3 success over the Cardiff club side in 2001.

Their chances were further diminished shortly before kick-off when Scotland international fly-half Dan Parks, who scored 347 points in 38 appearances for the Blues before moving to Galway for this season was ruled out by a hamstring strain.

Slick handling and skipper Gavin Duffy's intervention allowed Poolman to speed over at the flag and wing Fetu'u Vainikolo put Faloon through some weak defence for Nikora to convert.

Patchell's long-range penalty before helping to create their opening try by wing Harry Robinson after 20 minutes.

Nikora responded with a penalty to leave his side 15-8 ahead at the break.

And Harris-Wright was also sin-binned for the offence.

Another Patchell penalty was cancelled out by Nikora and when an aggressive Blues scrum allowed Patchell a further opportunity at goal the shot went wide.

Scrum-half replacement Liam Davies' deft handling sent Copeland galloping away to put the Blues ahead for the first time.

But Faloon darted over from a scrum for his second try and while Patchell's fourth penalty cut the gap to a single point, Connacht forced the Welsh region back into their own 22 and Nikora added another three points to secure victory.