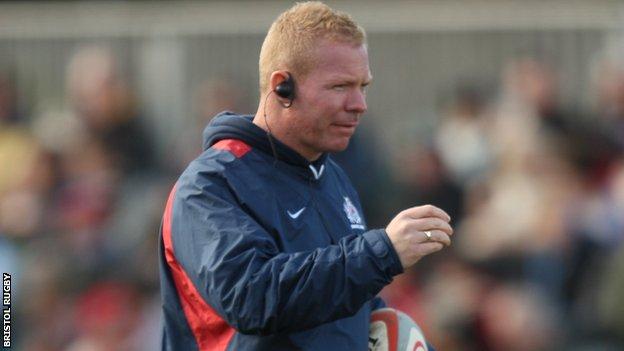 Bristol head coach Liam Middleton is excited at the prospect of working with new director of rugby Andy Robinson.

Middleton was promoted from academy manager in March 2011 and led Bristol to the Championship play-off semi-finals in his first full season.

"I'm excited to share philosophies with a world-class coach; it'll enhance what we do here," he told BBC Radio Bristol.

The players we've recruited recently bought into the vision of this club; Andy's appointment backs up that vision

"The club requires this position because we are developing so fast both on and off the pitch."

Bristol have been absent from the top flight of English rugby since 2009 and despite finishing top of the Championship table twice, they have failed to secure promotion.

Ex-England and Scotland boss Robinson was appointed on Monday.

"I see it as a partnership. It gives me the opportunity to focus more on coaching duties rather than other things that I have perhaps had to these past few months," added Zimbabwe-born Middleton.

"We recruited four very good players recently [Mark Sorenson, Peter Buxton, Errie Claassens and Andy Short will join next season] and they've bought into the vision of the club despite us being in the Championship. Andy's appointment backs up that vision,."

Bristol currently occupy the final play-off spot in the Championship, sitting in fourth position, just a point clear of both Cornish Pirates and Leeds Carnegie.

Having endured a difficult start to the season, where they lost five of their first eight league matches, they are now on a run of six wins from seven.

"We have real momentum and will come into good form in the last month or so of the season," added Middleton.

"That's always been the plan and I'm really positive about us peaking so we're a real threat to this competition."