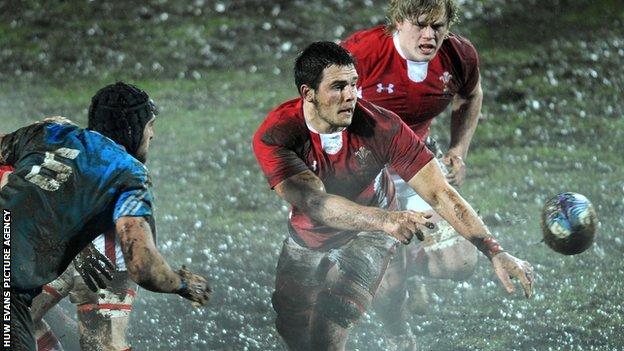 Wales Under-20 continued their Six Nations title challenge with a battling win over their Italian counterparts in dreadful conditions in Viterbo.

Victory followed triumphs over Ireland (17-15) and France (27-13) to leave Wales unbeaten at the top of the table.

Flanker Daniel Thomas went over in the first minute. Scrum-half Rhodri Williams followed suit before the visitors were awarded a penalty try.

The match had been following heavy rain.

But conditions eased sufficiently for the game to go ahead and Scarlets flanker Thomas gave the hosts the perfect start as the Welsh forwards drove for the line from the kick-off.

Edoardo Padovani's penalty gave Italy their only first-half points, but the hosts fought back after the break.

The latter's banishment, in the 58th minute, meant Wales were briefly down to 13 men.

That gave Mbanda the chance to go over and Michele Campagnaro converted.

But after being restored to a full complement, Wales regained their composure and control for fly-half Davies to slot the late penalties that ensured victory.

Wales Under-20 coach Danny Wilson told Scrum V: "We wanted to get the game played. We felt we had a game plan that could do a job. At times that faltered, there's no doubt about that.

"But on the whole the character that these boys has just shown yet again that they're a real, brave bunch.

"Our scrum gave us a bit of a weapon and when we got field position the errors came in and… we took the points that put us far enough away.

"So a mature performance and really pleased with what the boys have done."