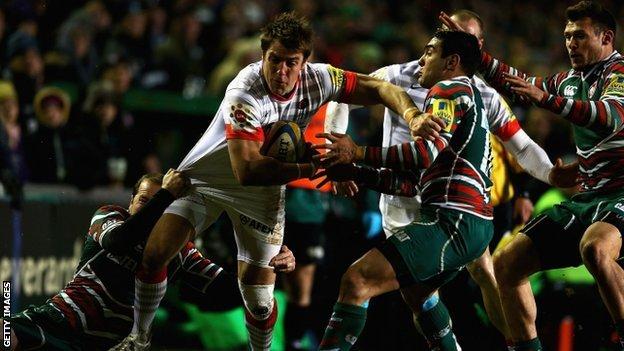 Saracens tightened their grip on a play-off spot as they scored four second-half tries to recover from 11 points adrift away to Leicester.

Julian Salvi and Dan Bowden scored for Tigers, but only a late penalty try ensured them a losing bonus point.

The result keeps Saracens just a point off leaders Harlequins.

The Londoners' visits to Welford Road have been tempestuous affairs in the past with former coach Brendan Venter and hooker Schalk Brits suspended for incidents during their 2010 win at the ground.

This meeting was more notable for Saracens' actions on the field than clashes off it however, as they shrugged off a disappointing first-half showing to surge to victory.

Leicester seemed to have converted their early superiority into a lead that would be good enough for victory.

After George Ford had levelled at 3-3 with a simple penalty, prop Logovi'i Mulipola bulldozed over in the 29th minute to put the home side ahead.

Shortly afterwards a thrilling counter-attack, featuring a neat chip from Ford and good work from Geordan Murphy and Adam Thompstone, was finished by New Zealander Bowden to extend the lead to 17-3.

But Saracens came roaring back after the break.

Strettle burst through a hole in the Tigers' backline to score, before Short, on the opposite wing, slipped a series of tackles to put the visitors ahead at 18-17.

With the home crowd stunned and Leicester reeling, Tomkins' cut-out pass out-flanked the Tigers defence to gift Strettle his second.

Strettle blotted a fine performance with a cynical knock-on to prevent Leicester making use of a late overlap. Referee JP Doyle showed the yellow card and awarded a penalty try, but it was only ever good enough for a consolation bonus point for Leicester.

Leicester director of rugby Richard Cockerill: "We controlled field position and the game in the first half.

"In the second half it was a complete role reversal and you have to give credit to Saracens.

"They played well and put us under pressure and we could not cope with it.

"It happens, it's done, we have lost - fair play to the boys for playing to the death and getting a point which may be important.

"It's not a disaster for us. We have to dust ourselves off and Sale next week becomes pretty important for us."

Saracens director of rugby Mark McCall: "It was a game of two halves. We did not turn up in the first and at 17-3 down just before half-time we had a mountain to climb, especially being at Welford Road.

"Leicester were on form at that point and we did incredibly well to turn it round in the second half.

"We were average in everything we did in the first half. We lost a lot of collisions and did not do the things we normally do.

"The dressing room was calm at half-time and the players said we needed to be much better in the second half and we were."