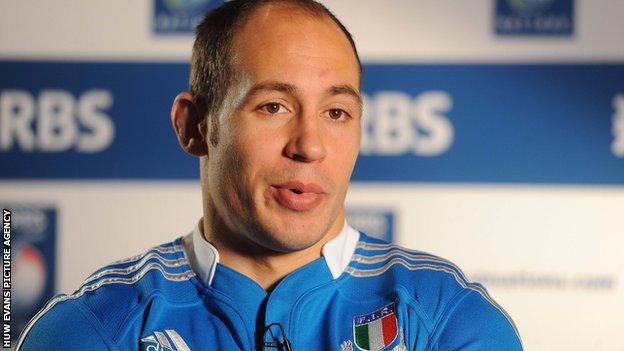 Italy captain Sergio Parisse has been banned for 30 days and will miss the Six Nations game with Wales in Rome.

Parisse is also set to miss the rest of the 2013 Six Nations, unless he launches a successful appeal.

Sorry to my team-mates and fans for the red card, which I find too harsh!

The number eight was sent off while playing for club Stade Francais for insulting the match referee.

Parisse, 29, was banned for 40 days, with 10 of those suspended, at a French league disciplinary hearing, meaning he can play again on 18 March.

"It's no surprise he has been done for speaking to refs, it's not something he hasn't done before," said Edwards.

Parisse is an inspirational captain for the Azzurri who has won 93 caps and scored the first try in Italy's shock win over France.

Under International Rugby Board laws, the sanction for players found guilty of abusing a match official ranges from a six to a 52-week suspension.

Parisse, who can appeal against the verdict within 72 hours, denies insulting referee Laurent Cardona.

If he does not appeal, or is unsuccessful, he would miss Italy's final two games, against England at Twickenham and Ireland in Rome.

Parisse was sent off after 36 minutes of Stade's home Top 14 match with Bordeaux-Begles on Saturday 16 February, having scored a try in the fourth minute.

The 93-time capped forward later wrote on Twitter: "Sorry to my team-mates and fans for the red card, which I find too harsh! I never insulted M. Cardona."

The 33-year-old was left out for the games against France and Scotland. Italy stunned France 23-18 in Rome but were overwhelmed 34-10 by Scotland at Murrayfield.