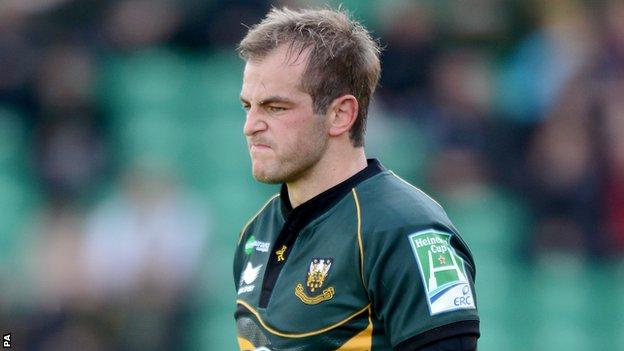 Northampton fly-half Stephen Myler has agreed an extension to his contract that was due to expire in the summer.

Saints have not disclosed the length of the 28-year-old's new deal but say it is for "the foreseeable future".

"I love the club, love the supporters and it's a great group of lads. I'm genuinely excited about where the team is going," he told the club's website.

"When I first came here from [rugby] league I wasn't sure how long I'd last, but I've thoroughly enjoyed my time."

He has since made 187 appearances and scored 1,427 points, the third-highest total in the club's history.

"The club made the transition easy for me and it speaks volumes that I'm still here so many years later," Myler continued.

"The past few seasons, we've been gradually building momentum and obviously winning the Challenge Cup and LV= Cup are the highlights of my career.

"The Heineken Cup final [in 2011] was another step forward and it showed just how far the club had come in a short space of time."

"He has an intelligent approach to the game and a superb work ethic.

"Time and again Stephen has shown he is a very good player and someone who we can build the team around," he said.